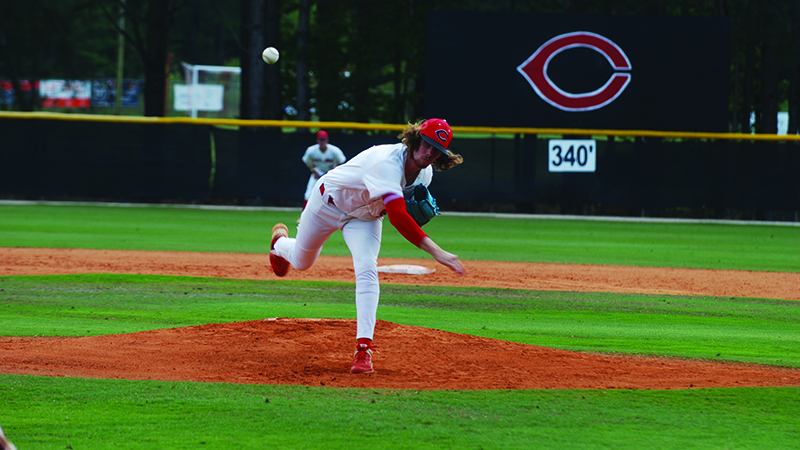 Callaway used a dominant, complete game pitching performances from Justin Moore and Tucker Starling to sweep Fannin County and advance to the round of 16 in the state tournament on Friday.

The first game was a pitching duel that saw the Cavaliers secure a 1-0 victory.

The Cavaliers plated the lone run of the game early as Andrew Locke scored in the bottom of the first inning on a passed ball.

The Cavaliers only generated three hits in the game, but it was still enough to get the win. Starling had by far the best offensive performance of the game as he went 2-for-2 with a walk and a stolen base. Locke was the only other player that got a hit for the Cavaliers.

Justin Moore was his usual dominant self as he pitched a complete game shutout with 12 strikeouts and only allowed five hits. Moore got into a spot of bother in the top of the sixth when Fannin County got a runner on third with no outs. Moore handled the situation and got out of the inning unscathed.

The Cavaliers’ offense got rolling in the second game as Callaway earned a 7-2 win to send them into the second round of the playoffs.

Bryce Hubbard got the scoring party started in the first inning when he hit a solo shot over the right field wall.

The score stayed at 1-0 until Callaway added an additional two runs in the third inning when CJ Stephens hit a two-RBI double with two outs to give the Cavaliers a more comfortable lead.

The Cavaliers added another two runs in the fourth inning to take a 5-0 lead. Lashun Gates scored on a passed ball to get the scoring started in the inning. Julian Dukes followed this with a sacrifice fly to drive Moore home.

The Rebels struck back with two runs in the bottom of the fifth inning, but that was all they could muster as Starling slammed the door on any chance for a rally after that.

The Cavaliers added another two runs in the sixth inning to pad the score and give themselves a 7-2 lead. Dukes hit a two RBI single to drive home Brantin Swanson and Jacob Karvelas to all but seal the series sweep for Callaway.

Starling had a commanding performance on the mound as he went all seven innings and struck out four of the five batters he faced. He ended the game with eight strikeouts and allowed seven hits and two earned runs.

Dukes led the team with three RBIs as he went 1-for-2 from the plate. Stephens continued the torrid tear he has been on as of late as he went 2-for-4 with two RBIs. Swanson and Karvelas both went 2-for-3 with a run scored. Hubbard had the monster home run that got the scoring started for the Cavaliers as he went 1-for-2 with two runs scored, a RBI and two walks.

The Cavaliers advancing to the round of 16 has become a regular occurrence for the school as the last time they were eliminated in the first round was back in 2011. Callaway will host the winner of the Early County-Lamar County series on May 4-5.