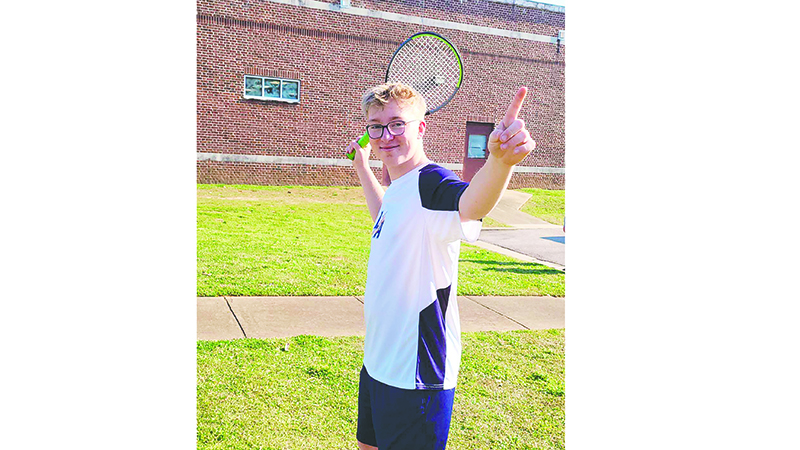 From Germany to the United States, Tim Kuebel has fallen in love with his temporary home. Kuebel is a foreign exchange student at LaGrange Academy that was looking forward to new experiences in a new country.

“This is my first time in America,” Kuebel said. “Everybody has been super nice here, and I love the food here.”

Kuebel has fallen in love with American fast food, specifically Chick-Fil-A, which is not something he ever encountered in his home country.

Kuebel misses his friends and family back in Germany, but he particularly misses the compactness of the towns. At home, he was able to ride his bike most places, and there are not as many cars in the streets. He said American towns are more spread out. Kuebel hails from a smaller town called Buchholz, which is near Hamburg. Kuebel roots for the Hamburg Sport-Verein football club (soccer team to the less civilized), but does not play soccer. He is a tennis and golf player with tennis being his main passion. Kuebel started playing tennis when he was eight years old and fell in love immediately. He has become quite the player and took his talents to LaGrange Academy for a year.

“He’s a phenomenal tennis player,” LaGrange Academy head tennis coach Ken Klinger said. “The first day off the plane he was asking me about the tennis team. We went out and played tennis on his first day here because I couldn’t even hit off him he was so good.”

In Germany, there are no sporting teams attached to the schools like there are in the United States. This is Keubel’s first time playing organized sports with his school.

“It’s really nice. I like my coach a lot, and it’s fun to practice with my teammates and drive up to the matches and of course win matches together,” Kuebel said.

Kuebel dominated the region tournament and won first place as he beat the reigning state champion in the region title match. He is only a junior but stands well over six feet tall and towered over many of his opponents.

“It’s an amazing feeling to walk off the court and know that you are a region champion,” Kuebel said. “Without the support of my team, I would have had a much harder time.”

Kuebel went on to play at the state tournament but was not as satisfied with his performance as he ended up finishing in fourth place.

“The first two matches I played well, but I lost the third and fourth match and didn’t play well,” Kuebel said. “I feel like I could have won that.”

Kuebal uses a powerful forehand and a controlled ability to serve to command most of the matches he plays in but did not have his best showing at the state tournament.

Kuebel is more than just a tennis player for LaGrange Academy, he also is on the golf team. He went to the state tournament and finished eight earlier this week. Kuebel has enjoyed his time in LaGrange so much that he can see himself continuing his education and athletic career in the United States someday.

Callaway Foundation announces scholarship in honor of Oliver of…