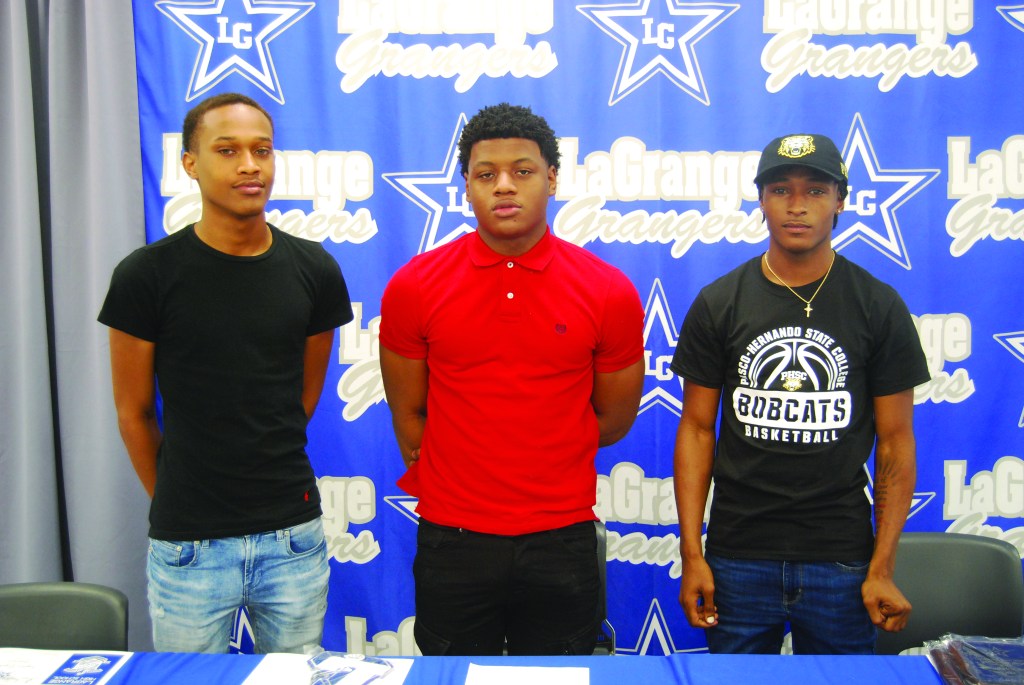 The LaGrange boys basketball team had three players sign to play basketball at the next level on Thursday.

Kobe Jones is heading off to Pasco-Hernando State College in New Port Richey, Florida. Jones was a four year starter for the Grangers as he commanded the ship from the point guard position. Jones will be in a run and gun system at Pasco-Hernando, which will suit his fast paced style of play.

“The style of play is going to fit him because the team gets up and down, and that’s what he does,” head coach Mark Veal said.

Jones was quick to thank the one person who stood by him and made sure he got every opportunity to play basketball.

“I want to thank my mom for always being there and making anything happen and getting me into any program,” Jones said. “From taking me to practice every day to long tournament drives every weekend to football games freezing in the stands, even though she didn’t want me to play football.”

Tae Render and Taylor Stephens will be teammates once more as they both signed to play with Southern Basketball Academy in Atlanta. This is a prep school which means that it is essentially an extension of high school. The two players will still have four years of eligibility left after attending Southern Basketball Academy. They will go and try and show what they are capable of to earn an offer from a college.

“For a prep school, you basically go there and play basketball and you take three online classes, so that you have four years of eligibility left,” Veal said.

Render only spent one year at LaGrange but had a tremendous year and will now have a chance to show his skills at the Southern Basketball Academy.

“I want to thank coach Mark Veal, coach Bernard, coach Scotty for pushing me every day to become a better student-athlete,” Render said.

Stephens was the Grangers sixth man this year and was a member of the Grangers basketball team all four years he attended LaGrange High School.

“I want to thank my grandma, granddaddy, momma, and dad for getting me to the point I’m at now,” Stephens said.

Veal concluded the ceremony by telling the three players not to be season ticket holders at the school. He encouraged them to tough it out when things get hard and not to just give up and come back to their hometown.