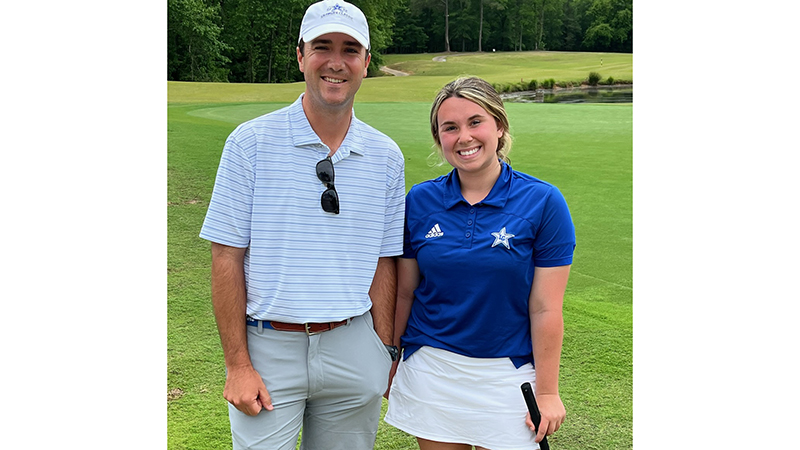 LaGrange High School golfer Macee Stone is heading to state as an individual participant after winning the area tournament earlier this week. It was a monumental achievement for Stone as only one female golfer per area advances to the individual competition at state.

“I did not play very well, so I was very surprised it ended with me going to state as an individual because I really didn’t expect that,” Stone said.

She felt like she did not even bring her A-game to the area tournament but still came out victorious.

“Everything just felt off,” Stone said. “My swing just felt weird, and I just couldn’t figure out how to fix it in the moment.”

Stone actually had to win a sudden death playoff as her and another girl tied for the lead after 18 holes.

“I had to say to myself ‘don’t overthink it. Just do what you know how to do,’” Stone said. “It’s going to be OK is what I had to keep saying to myself.”

Stone’s opponent from Cairo High School hit a wayward tee-shot and put herself into trouble on the first hole of the playoff. Stone kept her nerves and delivered a bogey, which was good enough to see her move on to the state tournament.

“She played one of her less competitive rounds that day and was still in a position to go to state as she was tied with another girl,” head coach Mike Pauley said. “It was exciting, we had all our boy and girl golfers on the hill to watch.”

Pauley has been a major calming influence on Stone, who does not like to overthink things on the course. She is appreciative to have a coach that is not pushing her and constantly overanalyzing her play.

“He doesn’t talk with me about golf when I’m playing and I like that,” Stone said. “When he comes up to me, he doesn’t tell me what I should do. He asks me how am I doing and tells me ‘you got it.’”

“She doesn’t want the pressure of golf,” Pauley said. “She just wants to have a good time. I asked her, ‘What helps you?’ and she said ‘don’t overdo it,’ which is no problem.”

“I’m excited since it’s my senior year, and I get to go one last time, but I’m still a little nervous because those types of tournaments make me nervous,” Stone said.

Stone does not have any set goals in mind for the state tournament, but she does not want to replicate her performance in the area tournament as she knows it was not her best work.

“I’m not really sure how far I can go honestly, but I think I’ll be OK,” Stone said. “I’ll be fine as long as I don’t perform like I did in the area tournament.”