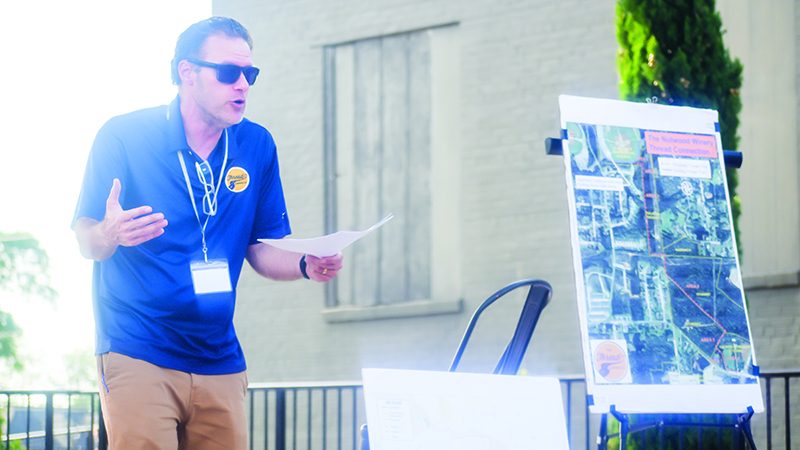 The Thread recently completed a big milestone — 10-miles of the walking trail system has been constructed since it began in 2017.

On Thursday evening at Overlook Plaza, the Friends of the Thread held a brief celebration for their success and also provided an update on what’s in store for the intertwining walking trail for the next few phases.

Friends of the Thread President Charlie Metcalf said one of the most anticipated extensions of the Thread’s current master plan is one to Nutwood Winery.

“We have an existing trail at the George Harris baseball complex, so the trail is going to wind through some natural forests and end up at [Nutwood Winery],” he explained. “It will eventually cross off Davis Road and connect to the Ridley Lake area.”

Natalie Hale, executive director of Friends of The Thread, said the design for the extension was created over a year ago. The extension will be completely off-road and showcase a more scenic area of Troup County.

Metcalf said the Nutwood Winery extension will expand the Thread masterplan from the originally planned 29 miles to 31 miles.

The idea for the Thread was first conceived in 2015 when a panel of LaGrange citizens hosted an information session at the Del’avant. Over 350 people attended the session, Metcalf said, and was the largest crowd gathered for public feedback for a city government project in LaGrange to date. The master plan for the Thread was unanimously adopted by the LaGrange City Council on September 27, 2016. Official construction started in March 2017 with the “model mile” at Granger Park.

The Thread is funded through SPLOST funds and additional fundraising efforts through Friends of the Thread, such as Dancing with the Thread, which is set to return on Aug. 13.

Additional plans call to extend the trail south at both the existing trails at Southbend Park and LaGrange College. The two extensions will form a five-mile loop and meet at the Callaway Clocktower, Metcalf explained.

Off of the Callaway Clocktower loop will be a new spur the historic Civil War cemetery on Mulberry Street. This cemetery, complete with Confederate, Union and unmarked graves, is additionally the final resting place of Horace King, a slave-turned-master architect, and his son, Marshall King. This spur will allow walkers access to the cemetery and to a historic covered bridge, built by King’s son, George King. The bridge is currently being rebuilt after being moved from Callaway Gardens earlier this year.

The most recently extended portion of trail —which gave the Thread its ten-miles completed status— was at the Coleman Center at LaGrange College.

For more information on the Thread and for membership information, visit https://www.thethreadtrail.org.