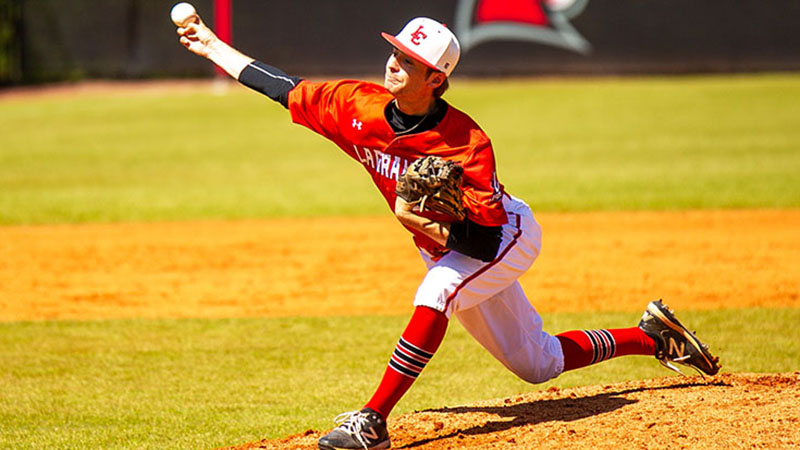 MONTGOMERY, Ala. – Second-ranked LaGrange took its USA South series from Huntingdon with a 9-4 win Sunday at Posey Field. The Panthers also locked up the top seed in the West Division for the upcoming conference tournament.

The four-time defending champions will host the four-team Bracket no. 2 of the tournament starting Thursday at Cleaveland Field in Williamson Stadium. The Panthers play fourth-seeded William Peace at 2 p.m., while second-seeded Methodist and third-seeded Covenant meet in day’s second game at 5:30 p.m.

The Panthers (33-5, 15-3 USA South) got home runs from Gabriel Pallo and McKinley Erves as part of a six-run fourth inning. Freshman reliever Jacob Brown threw a season-high of 5-1/3 scoreless innings to close out the game and raise his record to 7-0.

The game was scoreless through three innings. The Panthers loaded the bases with no outs and Jared Aldridge’s RBI single drove in Jack Layrisson with the game’s first run. Huntingdon turned a double play and was an out away from getting out of the inning.

Pallo then took Hall Billings deep over the right field fence for a three-run home run and a 4-0 lead. Rhett Mixon kept the inning going with a single and Erves followed with his home run to make it 6-0.

Huntingdon came back in the bottom of the inning with four runs off starter Stephen Bartolotta. Brown came in and got the final out of the inning. He scattered five hits and struck out seven without a walk in shutting down the Hawks the rest of the way.

LC added three insurance runs in the sixth inning. Pallo reached on an error to start the inning. He later scored on Ruth’s double to left field. Erves, who had walked earlier, scored on a wild pitch. Jack Layrisson brought home Ruth with a sacrifice fly to up the lead to 9-4.

Erves, Ruth, Cael Chatham, and Jared Aldridge had two hits each. Aldridge had a double included in his hits. Ruth now has 80 hits on the season, the first Panther to reach that level since Patrick Langley had 81 in 2008.