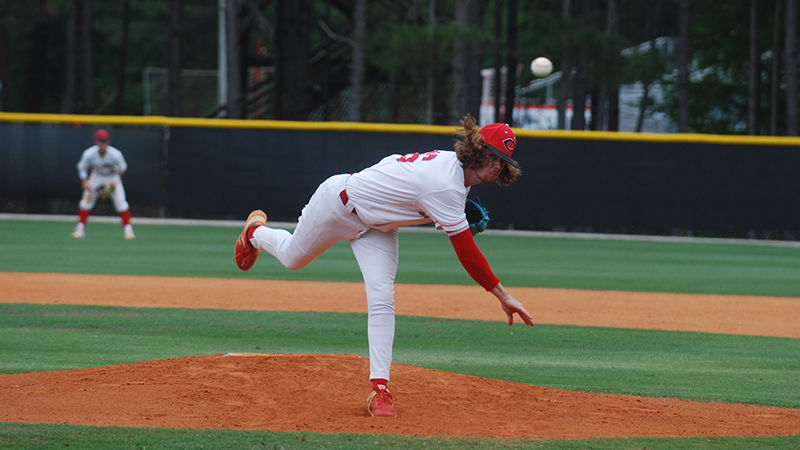 The Callaway baseball team barely broke a sweat as they swept Lamar County on Wednesday to book a ticket to the AA quarterfinals.

Callaway dominated game one en route to a 10-1 win.

Lamar County struck back in the top of the third inning with a lone run, but that was all the Trojans offense could muster in the game.

Andrew Locke stole home in the bottom of the third to get the run back for the Cavaliers. The Cavaliers added an additional run in the fourth inning on a Karvelas sacrifice fly.

The fifth inning saw the Cavaliers plate their final two runs of the game on a Hubbard two RBI double.

Hubbard was the hero on offense in the game as he went 3-for-3 with two RBIs and two runs scored. Locke was also outstanding from the plate as he scored four runs on 2-for-3 hitting and a walk. Stephens went 1-for-3 with two RBIs, a walk and a run scored. Karvelas earned two RBIs with Swanson and Sheppard getting one apiece as well.

The offense continued chugging right on into the second game as the Cavaliers won 10-4 to sweep the Trojans.

Lamar County took a quick 1-0 lead in the bottom of the first inning.

Callaway tied the game in the top of the second when Karvelas singled to drive in a run. The Trojans retook the lead in the bottom of the second with a run.

Callaway would not lose the lead again as the team added another two runs in the top of the fourth. Stephens delivered once again with a two out two RBI single to stretch the Cavaliers lead to five.

Karvelas scored on an error in the top of the fifth to give the Cavaliers even more of a cushion. The Trojans answered back with a run of their own in the bottom of the fifth, but it was a consolation run in the end.

The Cavaliers scored their final two runs of the night in the top of the sixth inning. Swanson and Karvelas hit back-to-back sacrifice flies to score two runs for Callaway. The Trojans added another consolation run in the bottom of the seventh to round out the scoring on the evening.

Stephens delivered in game two as well as he went 2-for-3 with two RBIs, two runs scored and a walk. Sheppard also showed up at the plate with 2-for-2 two RBI and two walk game. Despite only getting one hit, Karvelas also drove in two runs in the game. Swanson and Wilson had an RBI apiece in the game as well.

Starling got the start on the mound and was outstanding in his four and 1/3rd innings of work as he fanned nine batters and only allowed five hits and one earned run. Hubbard and Stephens came in to relieve Starling and combined to strikeout four with one earned run allowed.

Callaway will travel to take on Vidalia on May 10-11 in a best of three series in the AA quarterfinals.