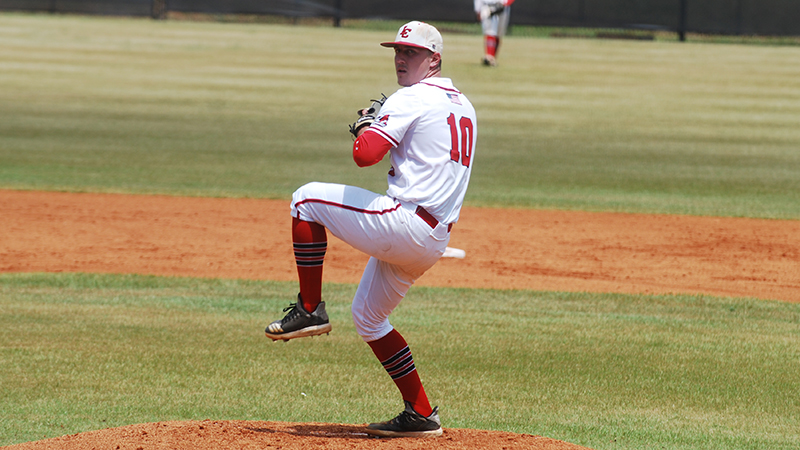 LaGrange College demolished William Peace 27-1 in the first game of the USA South bracket no. 2. This put the Panthers just two wins the tournament away from an automatic bid in the Division III national baseball tournament in Cedar Rapids, Iowa.

The Panthers scorched the Pacers early with three runs in the first inning and an additional five runs in the second inning. The Panthers’ torrid tear on offense did not stop there as they added four runs over the next two innings before exploding for 10 runs in the fifth. LaGrange College added five more runs in the seventh inning to round out the scoring for the team. The Pacers grabbed a consolation run in the fourth inning,but could not generate much offense on the night.

The main reason the Pacers bats were kept at bay was the work of the five pitchers that the Panthers deployed on the night. Baley Coleman got the start and only allowed two hits and one earned run in his five innings of work. Four pitchers– Ethan Kramer, Hunter Garcia, Cal Fuller, and Ethan Fry– pitched an inning a piece and only allowed two hits combined over the final four innings.

Catcher David Smigleski did damage from the plate on the afternoon as he went 4-for-4 with a whopping seven RBIs, three runs scored and a walk. His three RBI homerun in the bottom of the fifth inning was one of the biggest plays of the game for the Panthers.

Newly minted USA South player of the year, Joe Ruth, had quite the showing from the plate as well with a 4-for-7 five RBI afternoon. Senior Jack Layrisson showed out as well with a 3-for-5 offensive performance. He also added three runs and two RBIs to his slashline. Rhett Mixon had the other outstanding performance from the plate for the Panthers as the middle of the order went to work. Mixon went 3-for-5 with two RBIs and two runs scored.

The Panthers are currently ranked no. 4 in the nation and came into the tournament as the no. 1 seed and the prohibitive favorite. William Peace was only three games above .500 coming into the game and was the worst seed in the no. 2 bracket. The Panthers will take on Covenant on Friday at 3:30 p.m. with the winner earning a spot in the championship game on Saturday.