The Troup County Commission voted to table a discussion on a rezoning that would green light a new Dollar General on Whitesville Road, following concerns that were shared during the meeting.

Teramore Development, LLC, spoke with the commissioners at their board meeting Tuesday to share plans to rezone 2.5 acres of a nearly 77-acre property along Whitesville Road to construct a Dollar General store. The 77-acres are currently zoned agricultural residential but the developers requested the 2.5 acres for the store be rezoned as general commercial.

Cadenhead voiced concern on the state and lack of functionality of other Dollar Generals he recently visited and was worried the same issues would be reflected in the new development. Cadenhead submitted pictures of one he visited that showed carts of merchandise in aisles, blocking the entrance and exits. 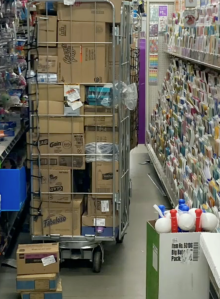 “We’ve had two that’s been shut down by the fire marshal,” he said. “I’ve talked to the city fire department, and they said they’ve had the same problem.”

Troup County Fire Chief Michael Strickland said when the fire marshal has to respond to calls of this nature, he works with store and district managers to clear the issues in a timely manner.

“He has shut stores down due to non-compliance until they get them cleaned up,” Strickland said. “I think that’s the only thing to do for any store like that in Troup County. They have to operate to safety standards.”

Commissioner Lewis Davis said he’d seen Dollar Generals in a similar state on the northern side of the county.

Ultimately, the tabling was to allow for the county to reach out to area Dollar Generals to correct any functionality issues they may currently have.

“We’re not going to get [Dollar General’s attention] unless we hold something up,” Cadenhead said.

The plans for the development were previously approved at the Troup County Board of Zoning Appeals.

As noted in the development’s description, the new store is a “newer prototype” of Dollar General stores. At over 10,600 square feet, it would include an estimated 1,000 additional square feet compared to standard Dollar Generals, including additional storage face for merchandise. Four inquiries of opposition were submitted to the county prior to the meeting.

Elaine Blair, a resident along Whitesville Road, voiced concerns that a hill south of the proposed location could create a safety hazard and increase traffic in the area.

Melissa Griffis, who spoke on the development, said the proposed Dollar General would not be directly competing against the gas station due to the store not selling products like gasoline. Anderson said the application for the development was consistent with the zoning requirements specified by the county and would have exceptionally low traffic impacts. The speed limit for Whitesville Road is 55 mph.

Teramore Development, LLC is currently constructing an additional Dollar General on Davis Road Bypass, which is in its completion stage. County Manager Eric Mosley said there were at least six Dollar Generals in the unincorporated Troup County area and at least six more in the LaGrange city limits.