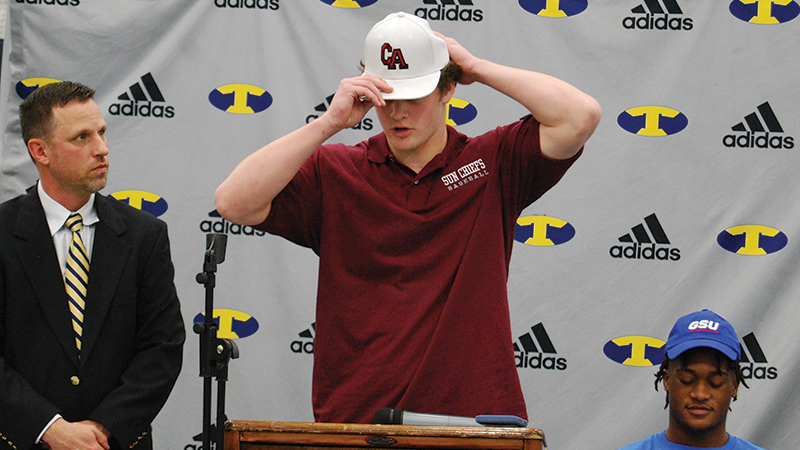 Brett Haynes is one of the leaders on the Troup County baseball team that is making waves in the AAAA playoffs. Fresh off a series victory over reigning champions Marist, Haynes is enjoying the ride.

“I knew we were going to perform good,” Haynes said. “Toward the end, I tried to hold in the excitement until the game was actually over.”

It was almost not to be though as the Tigers were trailing 10-5 heading into the bottom of the seventh inning in game two after having already dropped game one. What ensued was a miracle at Marist. The Tigers tied the game at 10 all and won on a walk off in extra innings. It was a very special moment for Haynes.

“My mindset was to go down fighting, and I’m glad we didn’t roll over and let them have it,” Haynes said. “Our back was against the wall, and we came out and did it. That might have been the best game of my life.”

It was a special moment in a special senior season for Haynes. The season did not get off to the best start, but the Tigers are peaking at just the right time.

The Tigers and Haynes will not be overlooked anymore. Haynes especially, as he is about to embark on his collegiate baseball career in a few months time. Haynes is committed to playing baseball at Coastal Alabama Community College.

“I knew I wanted to go JUCO, and I know I will be going into a great environment,” Haynes said. “I like the environment of the school, and I met some of the players there and they were cool.”

“I really like coach G. He is my guy,” Haynes said. “[When he took over,] was a good thing. It was an easy transition.”

Glisson took over after Haynes’ sophomore year and has had a big impact on Haynes growth. Haynes has also grown away from the baseball diamond as well — he now stands well over 6 feet tall.

His natural height and strength will be a huge asset for Haynes going forward as he has a desire to play Division I baseball. There is more than just natural size and ability for Haynes. He has worked his tail off at the plate this season. Haynes has cut down on his strikeout rate and has upped his on-base percentage as well.

His ability to go yard at any moment means that many pitchers will try to pitch away from him.

“I’ve got to get better at seeing off-speed pitches,” Haynes said. “Right now, I’m getting pitched outside a lot, and they are pitching around me. I’m definitely going to have to adjust.”

The ability to see flaws in his game and work on them to get better is an asset that will suit Haynes well going into the next level of baseball. He also has taken on more of a leadership role in his final season with Troup — another attribute that made him such an intriguing college recruit.

“It’s not just been me. All the seniors have taken on more of a leadership role,” Haynes said. “We try to get the team hyped up and ready to go.”