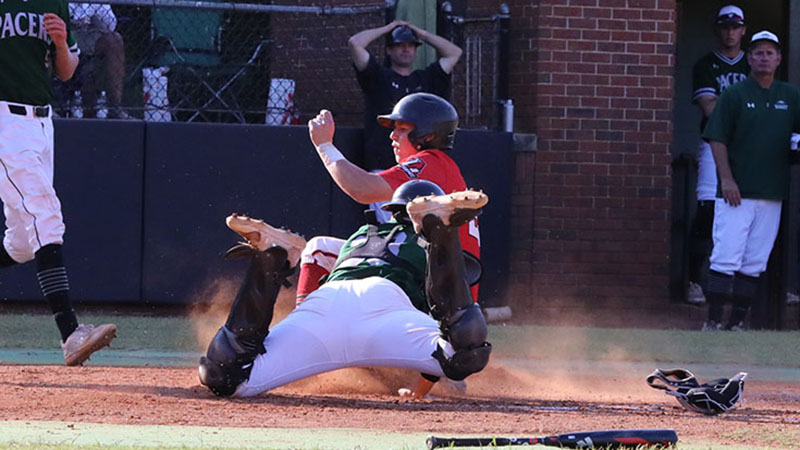 Fourth-ranked LaGrange used a 10-run third inning to rally past William Peace 12-6 in the USA South Tournament Bracket #2 on Saturday at Cleaveland Field in Williamson Stadium.

The win propels the Panthers in the USA South Tournament championship series for the second straight year. LC will host N.C. Wesleyan in the best of three series next Friday and Saturday. The Panthers defeated the Bishops last season in three games for their fourth straight conference championship.

The Panthers had beaten the Pacers (23-20) 27-1 in their first game of the tournament but found themselves in a 5-0 hole in the early going. Jake DaCunto’s three-run home run off starter Stephen Bartolotta highlighted a four-run third inning. DaCunto drove in five of the Pacers’ six runs in the game.

The Panthers wiped out the deficit in their half of the third. McKinley Erves led off the inning with a single, the first of 10 straight batters to reach and score in the inning before an out was recorded. The Panthers had six hits in the inning and took advantage of three walks and a hit batter. Erves capped the inning with a bases-loaded clearing triple, then scored the 10th run on Joe Ruth’s ground out.

Jack Richards relieved Bartolotta in the third, getting the final two outs. He allowed a run in the fourth on DaCunto’s two-out double before giving way to Jacob Brown to start the fifth. Brown allowed only three hits over the final five innings to raise his record to 8-0.

The Panthers got two insurance runs in the eighth. Cael Chatham hit a long solo home run to center with one out for the first run. David Smigelski followed with a double down the left field line and came home on Rhett Hebert’s two-out single to center.

LC finished with 11 hits in the game. Erves, Hebert, Smigelski, and Gabriel Pallo each had two hits. In the three tournament games, the Panthers scored 50 runs and had 58 hits.

Granger’s girls tennis team is heading to Rome for…