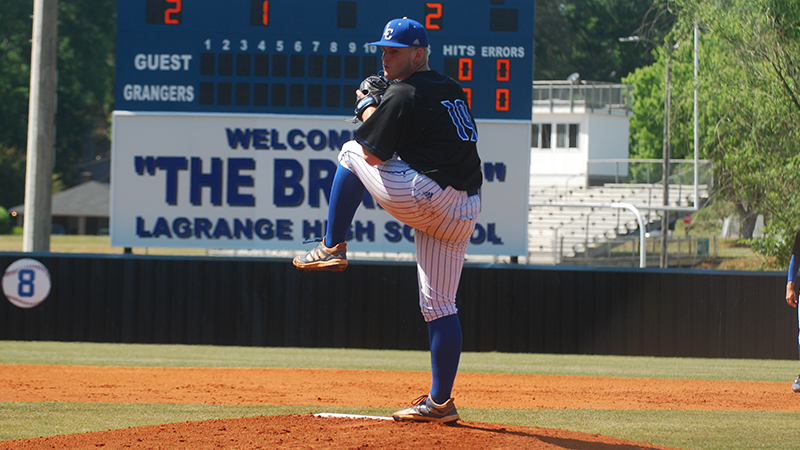 The LaGrange baseball team earned a 5-0 win over Heritage Catoosa in game three to win the series and advance to the semifinals on Tuesday.

“We did plenty of dumb things for sure, but the first thing that has to be said is about our pitcher. That’s a 14-year-old young man in game three of the playoffs,” head coach Donnie Branch said. “You throw a 14-year-old in that situation and have him pitch a complete game is phenomenal.”

That pitcher’s name: Caden Wood and he was just as dominant as advertised. Wood only allowed seven hits with two strikeouts across seven innings on the mound.

“I feel more confident in myself than I ever have before,” Wood said. “I feel 100% confident, and there’s no better feeling really.”

This was Wood’s second straight game three win as he has become the de facto No. 3 pitcher for those game three scenarios. Wood has delivered time and again and has earned the confidence of his coach.

“When we get to game three, we feel good about it,” Branch said.

The Grangers got off to a quick 1-0 lead in the game when Seth Stargell singled on a line drive to center field to send Trey Cook home.

The teams stayed deadlocked at this score until the fifth inning as the game hung in the balance with momentum swinging between the two teams. The one constant in it all: Wood, who delivered every time the Grangers needed him to.

“It feels great. It’s a great win for the whole team and the school,” Wood said. “When I’m pitching, I have confidence in my defense behind me.”

Wood was consistent on the mound, but it was a total team effort for the Grangers.

LaGrange scored four runs in the fifth inning to essentially shut the door on any chance of a Heritage comeback. Colton Esposito hit an RBI single to get the scoring started in the inning. Turner Cook hit a two-RBI double and just like that the Grangers had a 4-0 lead. Robbie Parker hit a sacrifice fly later in the inning to bring the Grangers final run home.

“Tuner, Zack (Thompson) and Colton today all had big hits,” Branch said. “Zack is kind of the heartbeat behind the plate.”

The Grangers got a little hot under the collar in the seventh inning, but Wood got out of the jam beautifully to end the game.

Turner Cook had the best day from the plate for LaGrange as he went 1-for-2 with two RBIs, a run scored and a walk. After a bit of a down last series against Flowery Branch, coach Branch was excited to see Turner Cook hit his way out of a rough patch.

“He had a bad series, last series,” Branch said. “I never lost faith. I knew he was going to come up big, and I had faith in him.”

Esposito also had a solid showing from the plate as he went 1-for-3 with an RBI and a run scored. Thompson and Stargell each went 1-for-3 on the night as well with Stargell adding an RBI to his stat line. Parker went 1-for -3 and generated the team’s other RBI. Trey Cook led the team with two runs scored.

“The trademark of this team is resilient, no matter how bad we do we just keep surging, and we keep coming,” Branch said.

The first two games of the semifinals will be at Granger Park on Saturday with the possible game three on Monday. The Grangers will take on Cedartown.

Troup’s season of heroic comebacks ends with a game…