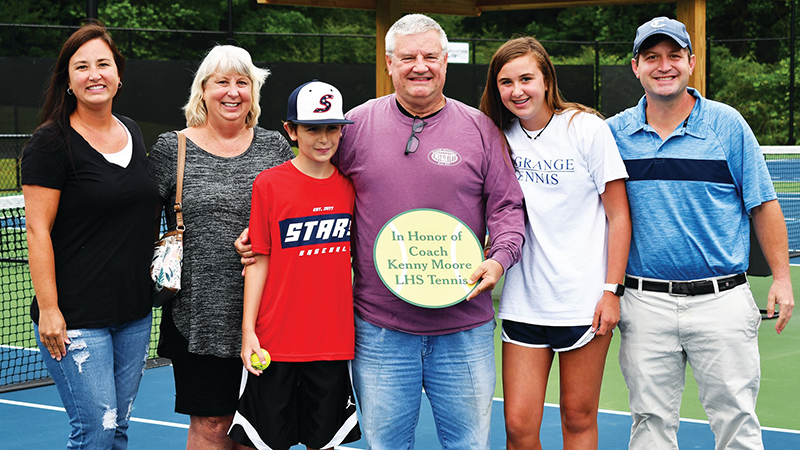 The LaGrange High School girls tennis team is preparing for a state championship match against Marist on Saturday. Kenny Moore has accumulated 897 wins as the head tennis coach, but the most important one has remained elusive. Moore led the girls Grangers team to the championship match in 2013, but the Grangers did not win the match.

“We’ve won a bunch of region championships, and we’ve gone to the final four many times,” Moore said. “I’ve been the coach here for many years and since I’ve been the coach we’ve won 897 matchups, so it would be cool to get 898 Saturday.”

Moore has been head coach for many different variations of Granger tennis since he took over all the way back in 1991.

“This was actually supposed to be a rebuilding year,” Moore said. “We had a group of three girls that graduated last year that were starters on the team for four years.”

It was everything but a rebuilding year for the Grangers as the team outperformed Moore’s expectations. The strong play of senior Sydney Edelson is one of the reasons the Grangers perform above their expected levels.

“Sydney is our best player,” Moore said. “She has worked so hard on her game.”

Edelson is the no. 1 singles player for the Grangers and takes on the tough tasks of playing against the opposing team’s best player.

Sophie Nix has been another of the reasons as she has not lost a single match all season. She is the team’s no. 2 singles player.

“She has gotten so much better,” Moore said. “You have to be a lot better than her to beat her.”

Nix has been on such a hot streak this season that Moore scarcely remembers a time when she even dropped a game.

The Grangers have four senior leaders on the team, which has helped propel LaGrange into the championship match. Adeline Lanier, Maddie Nolan and Ayaka Kimura are the other three seniors on the team alongside Edelson. Their play and uplifting spirit on the court has been instrumental for helping the younger Grangers.

“All four of those seniors have supplied good leadership for us,” Moore said.

Nolan and Limura are the team’s no. 1 double pairing. Minchae Kim and Abby Grace Kornek are the teams other set of doubles players. Lanier is the team’s third singles player.

The Grangers will have all five matchups going at the same time on Saturday. When one of the teams wins three of the five “lines,” as they are called, a state champion will be declared. The matches be held at the Rome Tennis Center at Berry College at 9 a.m.

“Marist is very good,” Moore said. “They are the elite of the state, but we look forward to going up there and seeing what we can do against them.”