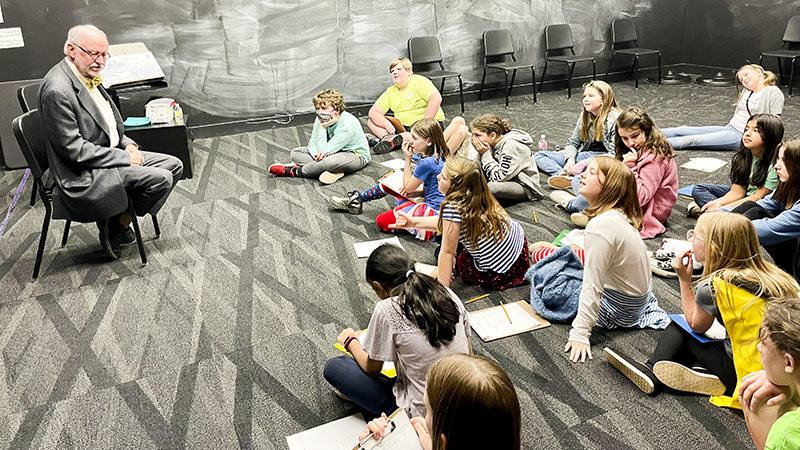 Once upon a time, 24 students from the Lafayette Theatre Academy embarked on a trip to Storyville, a fictional town where everyone has a fable to unfold and a tale to tell.  Now you have a chance to join them for an evening of theatre and storytelling beginning this Friday.

The one-act play, Storyville, by Lorraine Thompson, is actually Act Two of “And then what happened?,” a celebration of stories presented by first through sixth graders enrolled in the Lafayette Society for the Performing Arts Creative Dramatics classes.

The production opens on Friday, at 7 p.m., with additional performances Saturday, May at 2 p.m. and 7 p.m., and Sunday at 2 p.m. in the Black Box Theatre at LSPA.

“Storyville is a fast-paced and spirited re-telling of some of the world’s most beloved folk tales,” Director Carol Cain, who also serves as the instructor for the Creative Dramatics classes at LSPA, said in a press release. “Our audiences will recognize many of the stories and characters featured in this play, including the Gingerbread Boy, the Little Red Hen, and Foxy Loxy. The familiarity with the stories and some audience participation opportunities, along with the delightful characterizations from our students, make this a show that both adults and children will enjoy.”

Act One of this performance will feature storytelling performances by LTA students who will share personal narratives and famous folk tales developed as part of their semester-long study of storytelling.  “We were honored to have nationally known storyteller Donald Davis as our guest instructor in March when he was here for the Azalea Storytelling Festival,” said Cain.  “He really lit a fire under our students and many of them were quick to volunteer to tell their own stories.”

A storyteller herself, Cain was excited to see her students take the stage to share their tales.

“We all have a story to tell and these kids are no different,” she said.  “They have stories of animal encounters, sticky situations, and scary nights in the woods.  I am thrilled they have a chance to explore one of the world’s oldest art forms in front of a friendly audience.  It’s a scary thing to stand by yourself and relate an experience, but there’s nothing like hearing the crowd respond with gasps or laughter and of course, applause.”

The venue is the LSPA Black Box Theatre located at 214 Bull Street in downtown LaGrange.

Tickets for ‘And Then What Happened?’ and additional Lafayette Society for Performing Arts productions can be purchased by visiting their website at LSPArts.org or by calling LSPA’s box office at (706) 882-9909 during business hours. General seating is $18 adults for adults and $13 for students. Box office hours of operation are Monday to Thursday, 10 a.m. to 4 p.m. The box office also opens an hour before each performance begins.

WEEKEND TICKET: Back to school drives to highlight weekend

Hogansville to hold third annual back to school bash Saturday