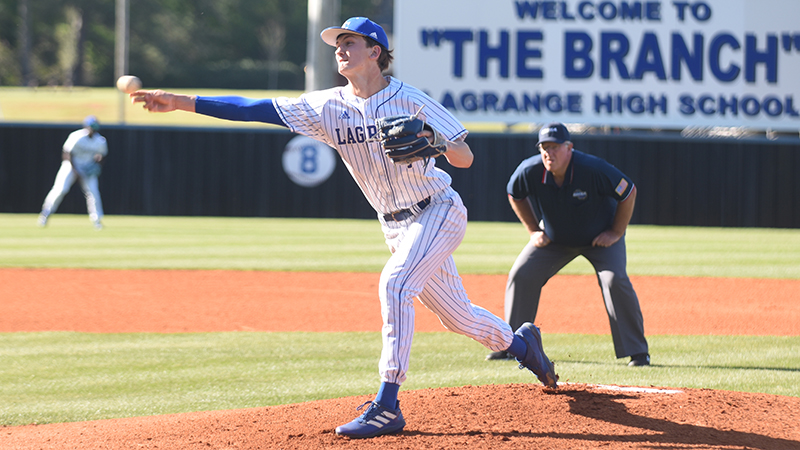 Trevor Booton is an ace for the Grangers on the mound and off it. The junior pitcher is already committed to playing baseball at Auburn but has unfinished business at LaGrange first.

“My mom went to Auburn and when I went down there and pitched for them one day I built a relationship with the coaches,” Booton said. “Nobody is better than the SEC in baseball. They are the best of the best.”

Booton had other offers to play baseball at major D I colleges — including reigning national champion Mississippi State — but Auburn was the right fit for him. Booton is excited to take the field as a Tiger in the future, but right now his focus is solely on winning a championship for the Grangers.

Booton is fresh off a dominant performance in game two of the state quarterfinals to force a game three. Booton pitched a complete game shutout and only allowed four hits on eight strikeouts. Booton put on the type of performance that got teams like Auburn interested in his abilities.

“I’ve been deep into games in almost every start this year,, so I knew I had to keep going,” Booton said. “I just kept rolling and usually I get stronger as the game goes on.”

In the bottom of the sixth inning, Heritage loaded the bases loaded with no outs as the Grangers led 1-0. Booton forced a double play then struck out the final batter of the inning to keep the game scoreless.

“I don’t think the moment is ever too big,” Booton said. “I just kept going and trusted myself.”

The trust in himself has built up over years of playing baseball. Booton started playing when he was around four years old and really started working on his pitching when he hit nine years of age. Grangers head coach Donnie Branch has been helping Booton with his pitching since he was nine, and it is paying dividends for the Grangers now.

Branch is not the only LaGrange coach that has had a big impact on Booton’s development. Strength and conditioning coach Tyler Eady has really helped improve Booton’s strength. Their work together in the weight room has led to Booton being able to throw pitchers at a higher velocity as well as maintaining his arm strength throughout the game.

Booton will look back on his junior year with fondness. The memory of beating crosstown rival Troup for the region crown was a major moment along his baseball journey.

“It was amazing to win the region championship, our first in 15 or more years,” Booton said. “This year’s team has been able to hang out a lot as a team. We have a great bond this year.”

Booton is also a member of the swimming team. He joined to help strengthen his shoulders and upper arms and really enjoyed being part of them, so much so that he will probably swim his senior year as well. Booton is also an avid golfer despite not playing for the school. His family is members at the Highland Country Club where he enjoys getting a round of golf in as often as possible.

Off the baseball diamond, Booton is a hard worker in the classroom. His ability to balance both academics and athletics is because of a strong work ethic passed down from his father, Terry Booton.

“I’ve always looked up to my dad,” Booton said. “He’s always been influential on me and taking me places and doing everything to make me the best I can be.”