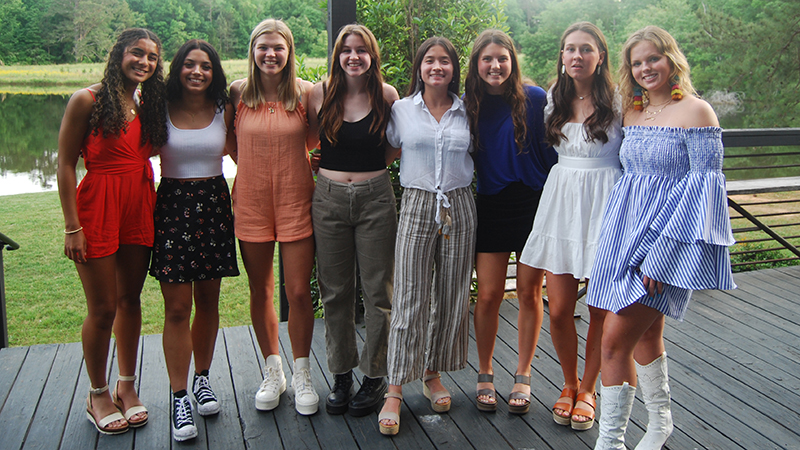 The LaGrange girls soccer team had eight players named to the all-region teams. Sam Cottle, Tatum Fritchley, Karley Perry, and Olivia Sato all made first team all-region while Maddi Gay, Emma Maradik, Tyra Potts and Carlee Roland made second team all-region. The team also had honorable mentions in Ava Arrington, Mariana Ceja, Delfina Martinez, Demi Russell and Morgan Mills White. It was a total team effort for the Grangers, who made the second round of the state playoffs this year with eight starters named to all-region and an additional five honorable mentions. The entire starting lineup was top three at their positions in region play.

The first team all-region consisted of the eleven best players at their positions in the region.

Cottle was the team’s leading goal scorer and earned first team honors with her ability to craft chances for her team in the final third of the pitch. Cottle is only a sophomore and has a lot of room to grow her game over the next couple of years at LaGrange and will likely be a regular on the first team all-region for years to come.

Her link up play with Karley Perry was crucial to the success of the Grangers team this past season. Perry also made first team honors. She is just a freshman and has a bright future ahead of her. Her ability to cut in from either wing spot and score goals and provide assists will be pivotal for the Grangers going forward. For her to make first team all-region in her first year in high school is quite the accomplishment.

Olivia Sato made first team all-region in her final year as a Granger. Her versatility and ability to play defense and midfield was a big part of the Grangers success this past season. It was her ability to lead the back line that made her so special for the Grangers. She will be hard to replace as LaGrange will look to replace her leadership and experience next season.

“It’s a really special moment,” Sato said. “It’s good to know we have so many girls talented enough to make an all-region team.”

These three ladies were joined on the first team by midfield maestro Tatum Fritchley. Fritchley bossed the midfield in most games that LaGrange played this past season. Fritchley was also honored by being named the best midfielder in the region. She is more than just a tactician with the ball at her feet, she is also one of the team’s leaders. She will be stepping up her leadership even more next season as she heads her into senior season.

“To do this with seven others shows you that we have a tight knit community with a Granger identity,” Fritchley said. “All our hard work has been leading to this.”

Emma Maradik earned second team all-region honors with sensational performances in goal. Maradik was just a freshman this season but adjusted to the far more physical play of high school. Her ability to stand on her head in goal and make save after save was a key factor in the Grangers being able to win some games they might have lost with an inferior keeper in goal.

“I think it’s really great and really rewarding because we work all season for this,” Maradik said. “It’s just a good reward at the end of the season.”

Tyra Potts is one of the junior leaders and is already making waves in the midfield for LaGrange. Her ability to break up play and get the ball quickly to the attacking players is essential for the team as the full backs often get a license to roam up the pitch so her ability on the defensive end is often critical to help stabilize the defense. She will be looked to take on more leadership next year as she transitions to a senior.

“I think this shows that the entire team put forth a lot of dedication and commitment,” Potts said. “To say that there are eight of us shows that it’s a team effort and comes from a place of hard work.”

Potts is often in the midfield trio with Fritchley and fellow second team all-region player Maddi Gay. All three are juniors and will be the key figures on and off the pitch for the Grangers next year as seniors. Gay is a dead-ball specialist and often finds he self-roaming higher up the pitch than the other two midfielders. Her ability to add an extra body in and around the 18-yard box is huge for the Grangers attack.

The final member of the girls all-region teams from LaGrange is Carlee Roland. Often deployed at fullback, Roland is adept at both the attacking and defending roles of her position. She is just as likely to put in a bone-crunching tackle as she is to deliver a sumptuous corner kick like the one she put into the box to assist the goal against Columbus that nearly earned the Grangers a region title. Roland is only a sophomore and will be looking to build on this breakout season for the Grangers.

“I absolutely did not see myself being named an all-region player,” Roland said. “I’m a worrier, so I worry about my performances as well as the complete team’s performances.”

LaGrange will be returning seven of its eight all-region players as well two of the five honorable mentions — Ava Arrington and Demi Russell. With so many young players making all-region teams, the LaGrange girls soccer team is built to contend years into the future.