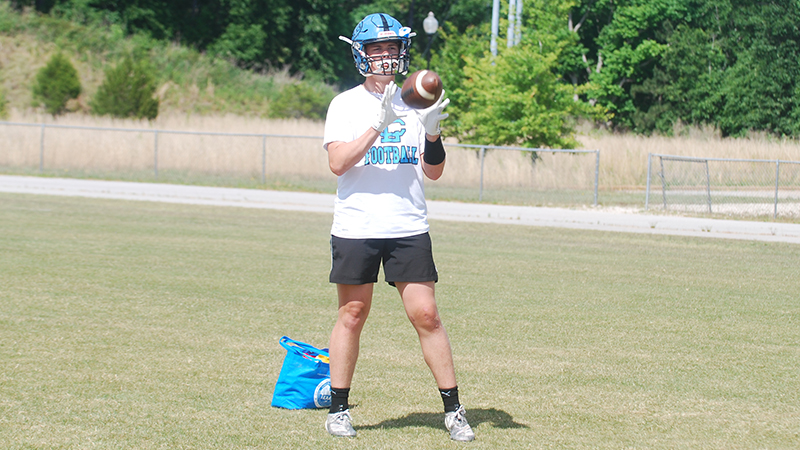 The LaFayette Christian School football hosted its final spring practice on Thursday to prepare for the jamboree on Friday. The Cougars play a round robin jamboree against Holy Ground and Heart Academy in Carrollton.

“We just want to go in and see what we look like,” head coach Jarred Pike said. “This is the first year doing the jamboree style.”

The Cougars play 8-man football and are geared up with even more players on the roster than last year. The team only had 11 players last year but has 20 so far in spring practices. The team still went 6-3 last season despite going through a bit of a rebuilding period.

Alex Tusing is going to be one of the senior leaders on the team. Tusing has already been a defensive captain and was a part of the Cougar squad that lifted the state title back in December 2020. He’s ready to make a big impact in his final season as a on the team.

“I want to be a leader on defense again this year,” Tusing said. “I also want to be the best offensive player I can and help our team win.”

Tusing — like many of the Cougar players — plays on both sides of the ball. On offense, he is one of the team’s best wide receivers and on defense he moves around the secondary as a defensive back.

“The next day I’m tired,” Tusing said. “I’m so tired, worn out, bruised, cramping, everything you can think of.”

Tusing is not the only rising senior looking to make a big impact in his final season in blue and black. Braden Firth is a rising senior and one of the biggest leaders and vocal teammates on the team. Firth is on a long road back from a dislocated kneecap he suffered back in 2020. His ligaments have weakened in the area so significantly that his kneecap popped out of place multiple times since the first time. He finally had surgery on it earlier this year and is sitting out spring camp but is there to support his team in any way he can.

“It’s tough not being out there,” Firth said.

Firth plays slot wide receiver and tight end on offense and linebacker on defense. Firth had a big season on offense last year and his versatility was big for the team. Playing football is important to Firth, but it is how you play and present yourself on the field that he is most concerned with.

“I want to show the young guys how to play for the glory of God,” Firth said. “I think that’s something that has been severely lacking in a lot of football teams we play. As Christian schools, we proclaim the glory of God, but we don’t always play for him.”

Ephiram Snyder is the team’s starting running back and nose guard. He already had the speed and elusiveness, but he has been working to add more power to his treads.

“I’ve been getting a little faster and a lot stronger,” Snyder said. “I’ve been hitting the weight room more and eating more.”

Snyder had 13 touchdowns last season and going into his junior season he is looking to score even more this season. Despite the personal goals, Snyder is a team first guy.

“We each help each other do the best we can,” Snyder said. “As my team helps me, I’ll improve. If we fail, we’ll all fail together.”

The Cougars will be looking to get some good experience at the jamboree on Friday. With so many freshman and younger players on the team, this will be valuable experience. The team will not have another scrimmage as the next time they hit the field against players from another team will be game one of the 2022 season in August.