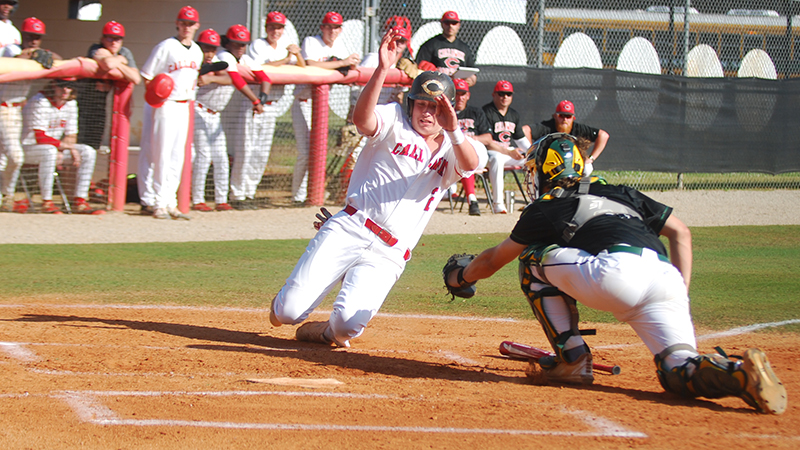 Bryce Hubbard just ended a fantastic sophomore season for the Callaway baseball team. Hubbard enjoyed a breakout season this year with his dynamic ability on the plate and on the mound.

“I’ve come a long way with my pitching and hitting,” Hubbard said. “My stats might not be as good, but as a player I feel a lot better.”

Hubbard added more power from the plate this year as well. His ability to hit balls out of the park often help spark the Cavaliers offense to life including in game two victory over Fannin County of the opening round of the playoffs when he launched the ball over the fence in the first inning to give the team a quick 1-0 lead. Getting better at the plate was not the only focus for Hubbard in the offseason, he was also working on his game on the mound.

“I’ve developed a lot more pitches this year,” Hubbard said. “I also have a lot more command as well. Coach [Jon Hopper], our pitching coach, has helped me out a lot.”

Hopper is willing to work extra with Hubbard and has helped him develop and mature his game.

“Any time I’m in a slump he’ll help me get out of it,” Hubbard said.

Hubbard was the team’s no. 3 pitcher and saw a fair amount of relief duty as well. With seniors and top two pitchers Justin Moore and Tucker Starling departing for college baseball in the fall, Hubbard is going to find himself even higher up the packing order next season. Despite his pitching prowess, Hubbard feels most comfortable at third base.

“I feel most natural at third base,” Hubbard said. “I like pitching and all, but I feel like I’m a better third baseman and hitter.”

Games when he is not the designated pitcher you can find him starting at third base. Hubbard has improved his defense at third as the work he has put in the weight room has improved his arm strength allowing him to get the ball to first base quicker.

The Cavaliers baseball players were more than just a team for Hubbard this past season, it was a brotherhood.

“This year everybody got along so well, and we were all in it for each other,” Hubbard said.

The team did not quite reach their ultimate goal of winning a state title, but it was another successful season for the Cavaliers as they made it to the quarterfinals of the state tournament. Hubbard was a big part of the reason why they were able to make another deep run in the playoffs this year. For Hubbard, there is nothing like those big playoff games.

“Man, I get so excited it’s hard to sleep at night,” he said.

Hubbard will have to step into some of the leadership roles left void by the graduating seniors. He is confident he can take on more of a leadership role next year. One of the reasons he feels this way is because of what senior Andrew Locke taught him during their time together.

“Andrew Locke has been like a brother to me the past few years,” Hubbard said. “He’ll always help me with baseball, and he will drive me places because I can’t drive yet.”

Callaway baseball is over for now, but come early 2023 it will be back, and Hubbard will ready to deliver for the team during his junior year.