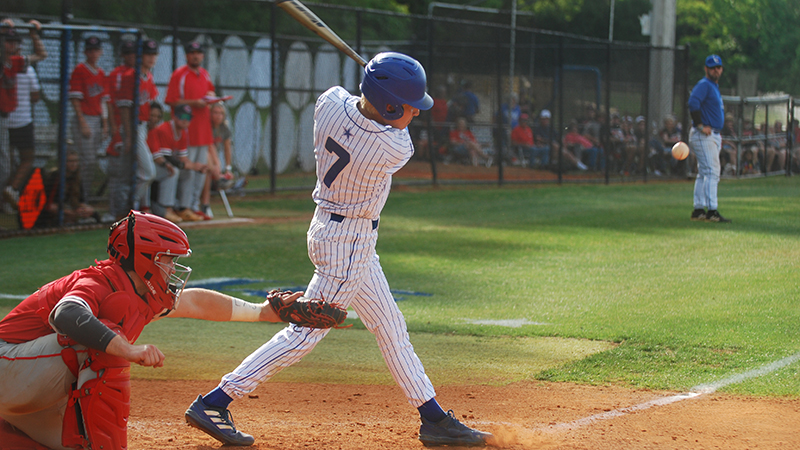 The LaGrange baseball team split the first two games of a double header versus Cedartown in the semifinals of the AAAA playoffs on Saturday.

Game one did not go the Grangers way as they lost 4-2.

“Game one was trash. We were bad, we did not play well,” head coach Donnie Branch said. “Offensively, we were really poor.”

Branch bemoaned the Grangers inability to get the ball down as they had a multitude of flyouts in game one.

Cedartown took a quick 1-0 lead in the top of the second, but it was not to last as the Grangers tied the game up in the bottom of the third. Trey Cook hit a single that sent Robbie Parker across home plate.

The Grangers were actually able to snatch the lead in the following inning when Turner Cook delivered an RBI single. It was not to last as the Bulldogs tied the game up with a run in the fifth before retaking the lead with two runs in the sixth inning.

“I told the guys that we laid an egg,” Branch said.

Despite the poor performance in game one, there were still a few bright spots including Trey Cook who got the start on the mound and pitched five and two-third innings where he allowed seven hits and three earned runs on four strikeouts. He also did damage from the plate as he led the offense with a 2-for-4 one RBI game.

Parker pitched the final inning and change as he only allowed one hit in his time on the mound.

Game two was an entirely different affair as the Grangers came out swinging and dominated the Bulldogs in an 11-0 mercy rule win in five innings.

“We knew after game one we would be playing Monday, there was no doubt,” Turner Cook said. “We were either going to sweep or play Monday. We knew we would get one in tonight.”

The Grangers got off to a blistering start to the game as they scored five runs in the first inning.

Esposito got the party started with an RBI single in the top of the first. Parker stepped to the plate with the bases loaded and two outs and delivered a bases-clearing double. Tanner Langley followed this with an RBI double to round out the scoring for the Grangers in the first.

The scoring did not stop there for the Grangers as they scored two more runs in the second inning on a Turner Cook home run that landed in the fountain in Granger Park.

“It was such a line drive that I didn’t know if it was going to make it over the fence,” Turner Cook said. “I was like ‘oh man I’m going to have to run this out’ until it went over the wall.”

LaGrange kept the scoring going in the top of the third inning when the team scored three more runs. Trey Cook hit an RBI single before Stargell legged out an inside the park home run to score two more runs and give the Grangers a 10-0 lead.

“I thought it was going to be a double out of the box,” Stargell said. “The ball got away from the shortstop, and Coach Craig (Mobley) waved me home so I kept hustling.”

LaGrange added one final run on the night in the fourth inning when Cooper Stephens grounded out to drive a run in and put the cherry on top of the win for the Grangers.

Trevor Booton got the start on the mound in game two and the Auburn commit was absolutely outstanding in his five innings of work. He only allowed four hits on three strikeouts in a win or home game.

“Once I find that groove, it feels like everything is working,” Booton said. “Once we got through the first inning, I was settled in.”

Booton was not the only player that delivered a huge performance under the brightest of lights, Trey Cook delivered from the plate once again in game two as he went 2-for-3 with a run scored, an RBI and a walk. Turner Cook came in clutch once again as he went 1-for-2 with two RBIs, three runs scored and a walk. The top of the order did a ton of damage as Stargell had a big game as well with a 2-for-4, two-RBI, two runs scored performance. Parker led the team with three RBIs as he went 1-for-3 from the plate with two runs scored.

The Grangers will take on Cedartown in a game three winner-take-all on Monday at 5:30 p.m. at Granger Park. Fourteen-year-old freshman Caden Wood will likely get the start on the mound for LaGrange. The winner will advance to the AAAA state championship series to take on North Oconee.