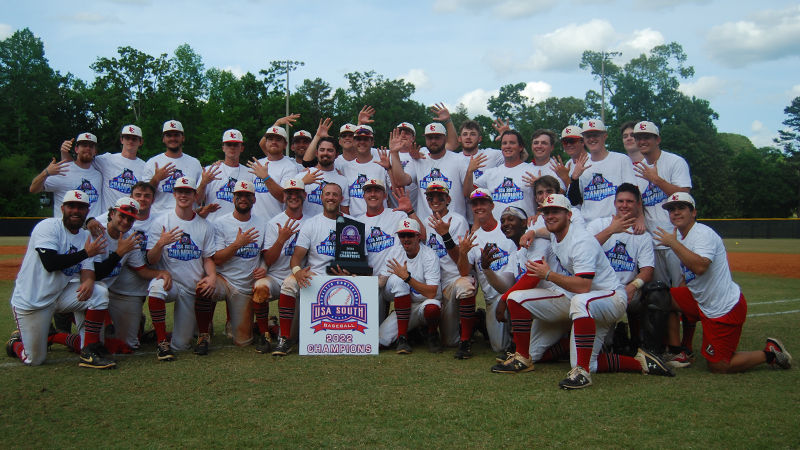 Fourth-ranked LaGrange College captured a record fifth straight USA South Tournament title Saturday with a 10-7 win over N.C. Wesleyan at Cleaveland Field in Williamson Stadium. The Panthers (37-6) swept the best-of-three series from the Bishops (27-18), who lost to the Panthers for the second straight year in the USA South conference tournament.

The Panthers get the conference’s automatic bid to the upcoming NCAA Division III national tournament for the fifth straight season. LaGrange College’s destination in the tournament will be announced Monday, May 16 when the 60-team field is set.

“I’m extremely proud of this team,” said Coach David Kelton. “To win five conference championships in a row is difficult. The guys have been consistent and battled all year, so it’s really rewarding to see their success.”

The Panthers scratched out a run in the third for a 1-0 lead. Rhett Mixon reached on the first of six Bishop errors in the game. He came home with two outs on a wild pitch.

The Bishops ran themselves out of a scoring chance in the first inning, with one runner picked off and another thrown out at the plate for the final out. The Bishops strung together three doubles and scored on a wild pitch against Panther starter Dalton Brooks in the fourth for a 3-1 lead.

The Panthers took the lead with three runs in the seventh. Chatham led off the inning with a home run to right, his fifth of the season.

Pallo tied the game with an RBI single. Rhett Hebert came around to score the go-ahead run on the Bishops’ second error of the inning.

The Bishops tied the game 4-4 in their half of the sixth. The Panthers answered with a six-run seventh inning, banging out five hits and taking advantage of three errors to take a 10-4 lead. Aldridge and Hebert had run-scoring doubles in the inning.

Chatham came on for Jacob Brown in the eighth after the Bishops had scored three runs to cut the Panther’s lead to 10-7 and got the final out of the inning. He issued a lead-off walk in the ninth, then retired the next three batters. The final out off Javier Quintana’s bat settled into Erves’ glove in right center to set off the dogpile celebration.

“This is the fourth one that I’ve won, and I actually cried afterwards,” Erves said. “It’s been a long journey coming back for my fifth year. Hopefully, this isn’t my last dogpile with these guys.”

Brown (9-0) got the win, pitching 2-1/3 innings and allowing the three runs. Brooks went 5-1/3 innings, allowing four runs, three earned, walking three and striking out three. Chatham earned his second save of the season and went 2-for-4 at the plate with the home run.

“I didn’t expect to pitch today, but coach Kelton said it was possible,” Chatham said. “I went out there to throw strikes and did the best I could.”

Chatham was one of six Panthers with two hits. LaGrange College finished the game with 13 hits.

The Panthers played in their final USA South Tournament. LaGrange College will be joining the new Collegiate Conference of the South for the 2022-23 season. In the seven years playing in the tournament, the Panthers won the five titles and were runners-up once. LaGrange College’s winning percentage of .844 (27-5) is the highest in the tournament’s history. The Panthers have a 21-1 record in the tournament since 2017. The Panthers set new team tournament records for runs (64), hits (80), doubles (23), and batting average (.392). Smigelski set a new tournament record with six doubles and Erves tied the record of 10 runs scored. The Panthers have scored 457 runs this season, breaking the record of 454 set by the 2001 team. The 37 wins this season is the second most in the program’s history, eclipsing the 2003 team’s 36.

“It’s a long journey to get to this point,” Kelton said. “There’s a lot of work these guys put in that goes unnoticed. I’m very proud of this team.”