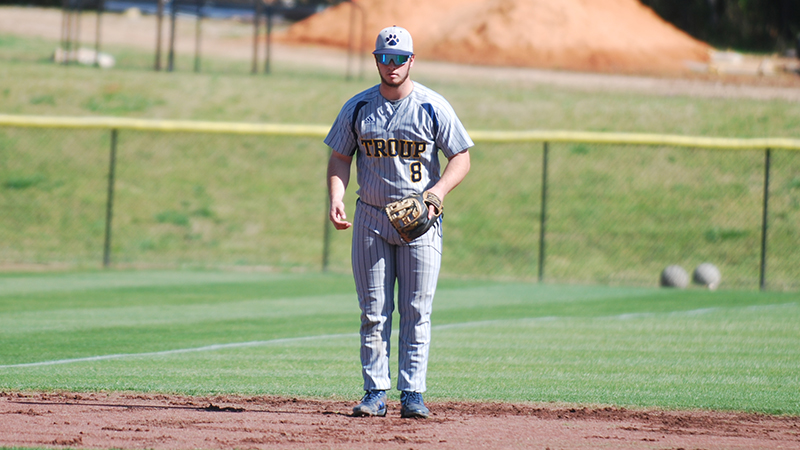 Reed Morris had a postseason that will live on forever in Troup County baseball lore. Morris hit .400 with 5 home runs – two of which were grand slams – and 22 RBIs across the Tigers eight games in the playoffs.

“I was comfortable. I was seeing the ball well,” Morris said. “It was the biggest part of the season, and I felt like I had to come through.”

Morris delivered time and time again for Troup during the playoffs, but there was no bigger hit than the one he delivered with his team down three runs in a win or go home game against Benedictine in the quarterfinals of the playoffs. With the bases loaded, Morris walked up to the plate and belted a ball out of the park for a walk-off grand slam.

“That’s what I dreamed of when I was a child, getting a walk off grand slam,” Morris said.

Dreams became reality this season for Morris as he went on a playoff run for the ages.

“He was on a tear,” Tigers head coach Tanner Glisson said. “We always had confidence in Reed, he’s a really good ball player.”

Coaches were not the only ones that took notice of his play in the postseason. Teammates were in awe of the way he was lacing the ball during the playoffs.

“It’s great to see,” senior leader Brett Haynes said. “I’m so happy that he was hitting the way he was. Every time he went up to the plate I knew he was going to do something special.”

The run Morris went on was certainly special. He was not chasing individual accolades but was instead doing whatever it took to help his team win games. He and the team had a never-say-die attitude as they always felt like they were not out of any game.

“We have a never quit attitude because we’re never going to quit until the final out,” Morris said. “We showed that we play with a lot of heart.”

Morris is quick to credit his teammates. He knows that without them consistently on base there would be nobody to drive in and accumulate these gaudy stats.

The scariest aspect of Morris’ postseason run for opponents? He still sees room for improvement. Morris believes that he can cut down on strikeouts and improve his consistency at the plate. He also plans to work on his defense in the off season to become a better all-around player.

This was Morris’ second straight run to the quarterfinals of the state playoffs with the Tigers. He is already plotting ahead as he is ready to be a senior leader for this team. Morris wants to reclaim the region title for starters and make another deep run in the playoffs.

“We get into a new region next year, which is going to be pretty tough,” Morris said. “First, we want to win the region then we want to make it even deeper in the playoffs than this year and possibly reach our ultimate goal [of winning a state title].”