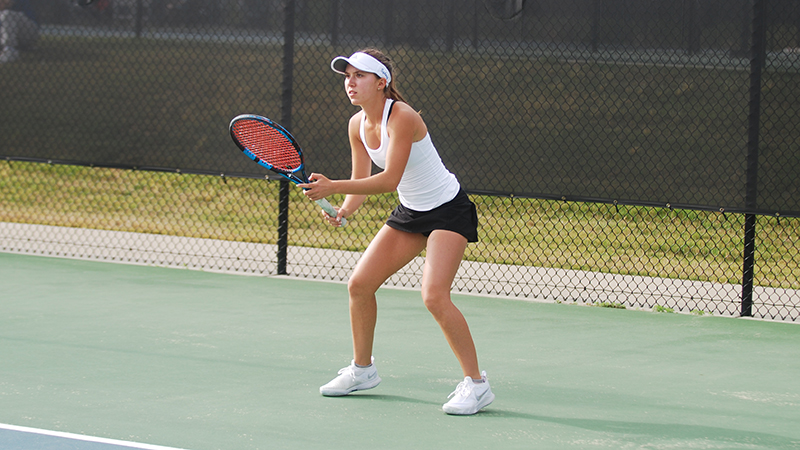 The LaGrange girls tennis team finished second in the AAAA state tournament after suffering a defeat to tennis powerhouse Marist in the final match on Saturday.

The Grangers had an uphill climb before the match commenced as Marist was the reigning AAAA state champions and is a private school that will be moving up to either AAAAAA or AAAAAAA next season.

Marist won three of the five lines and was winning the other two when they were pulled after the win was secured.

The Grangers showed a lot of heart and had no regrets as they left the courts on Saturday.

“I wanted to keep battling and be the last one on the court, so I would get pulled and not lose,” said senior Sydney Edelson who was the team’s no. 1 singles player this season.

“I think it is still something to be proud of that we made it here,” said fellow senior Maddie Nolen.

The other player pulled was the team’s no. 3 singles player Sophie Nix, who ended the season having never lost a match this year. She will be one of the returning players for the Grangers next year and will likely move up the no. 1 singles player as Edelson and the no. 2 singles player Adeline Lanier will be graduating in the coming weeks.

Despite the fact they came up short, the senior ride was everything to Lanier.

“I was really proud of this season because I never thought we would make it that far,” she said. “Maddie Nolen has been one of my best friends since I was little, and it was so special to go on this run with her this year.”

Nolen teamed up with Ayaka Kimura as the team’s no. 1 doubles duo this season. It was a partnership that struggled to click at first but found its groove down the stretch as they helped the Grangers reach the state finals.

“Me and Ayaka grew as a doubles team,” Nolen said. “At the beginning, it was a little shaky, but now I think we’ve perfected our game.”

The final doubles pairing consisted of Minchae Kim and Abby Grace Kornek. The duo will likely take on more responsibility next year as the Grangers graduate a large senior class of tennis players.

Moore does not chase titles, he is more focused on improving his team and enhancing the abilities of the players he coaches. It was another big season for his girls’ team as they won the region title and made it to their first state title match since 2013. Moore will look to have the tennis team back and firing on all cylinders next seaso, but will miss this special group of seniors that helped get this team so close to the title.

“I’m going to miss them like crazy,” Moore said. “All four are real special kids, and I’ve known them for a long time and not just on the tennis courts. It’s been really cool to go on this run with them.”