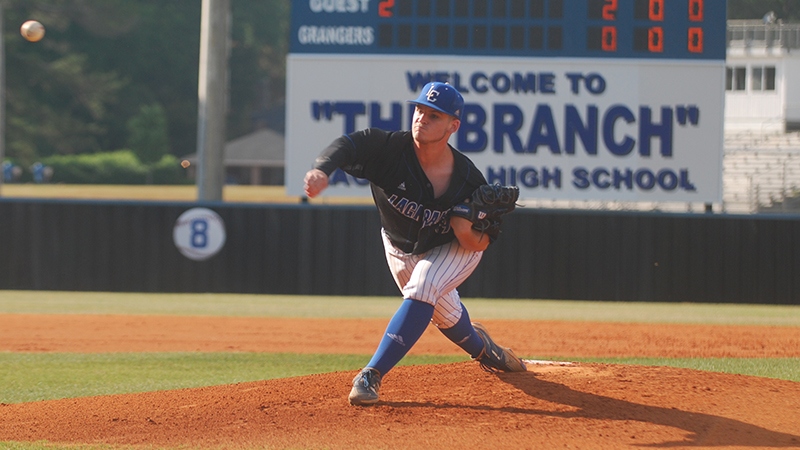 The LaGrange baseball team won game three 2-0 over Cedartown on Monday to advance to the AAAA State Championship for the first time since 2004.

“I feel pretty good, it beats losing,” head coach Donnie Branch said with a laugh. “Resilient is the word. The kids are tough.”

Tough is a bit of an understatement as the team shut out the Bulldogs in two straight games after dropping game one.

Caden Wood and Trevor Booton combined to pitch a no-hitter in the game for the Grangers, but it was Wood who was the star of the show. The fourteen-year-old freshman pitched in his third straight game three and was an ace again. Wood needed only 66 pitches in six and 1/3rd innings to complete his part of the no-hitter. Wood struck out three batters as well and is showing a ton of moxie in the playoffs with his play in pivotal game threes.

“I felt great, better than I’ve felt all year,” Wood said. “I was in total command of every pitch.”

“He’s been unreal. I couldn’t ask anymore from him.” said the junior, Booton. “That right there was a no-hitter out of him, unbelievable!”

Booton came in and threw one pitch to get a double play and end the game.

The Grangers took the lead early and held on as the Bulldogs huffed and puffed but could not get much going offensively. LaGrange scored both of their runs in the top of the first and never looked back. Colton Esposito, a senior, drove in what would be the winning run on a ground out to send Seth Stargell home.

“It feels great, truly amazing,” Esposito said. “You do so much work for just that one moment to put the ball in play and drive in the winning run.”

His fellow senior, Turner Cook, followed this with a two-out RBI single to give the Grangers the 2-0 lead they would hold until the end of the game. After a tough series against Flowery Branch in the second round, Cook has busted out of his slump.

“I knew he was going to try and throw a fast ball by me, and I got a hold of it for a single,” Cook said. “When you’re in a slump like that, you have to keep grinding and that’s what I did.”

“[Esposito and Cook] have been big all year,” Branch said. “Along with Zack Thompson, they’ve been the heartbeat of our team.”

Offensively it was not the best showing for the Grangers, but they got enough timely hits to make it count. They were led by Thompson who went 2-for-3 from the plate which was half of the Grangers total hits. Stargell went 1-for-3 and was the winning run that crossed the plate. Cook went 1-for-2 with an RBI and a walk.

“The team wasn’t hitting it well, but we always seem to get big hits when it counts,” Branch said.

The Grangers (31-10) will need some more timely hitting as they will travel to Rome to take on North Oconee (37-1) in the AAAA State Championship at AdventHealth Stadium at 5 p.m. start time with game two coming roughly 30 minutes after the conclusion of game one. A possible game three will take place on Monday. North Oconee is ranked second in the state in all classifications and comes into the series having not lost a game in the playoffs. Of course, Cedartown came into the semifinals having not dropped a playoff game only to lose back-to-back games and get bounced from the playoffs.