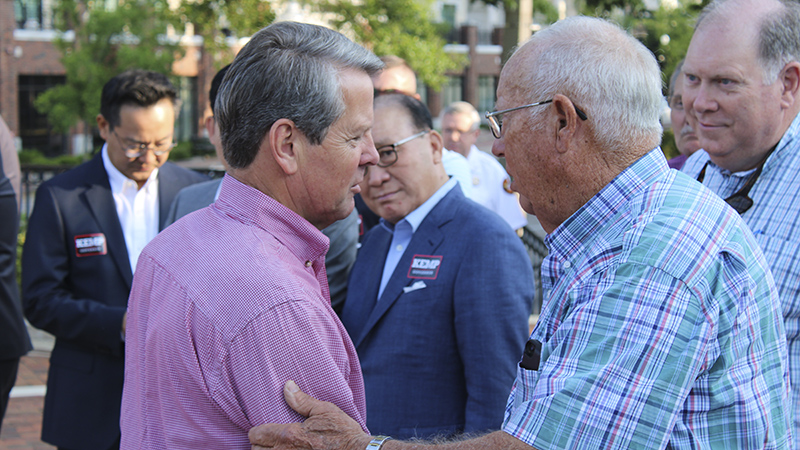 With election day for the primaries less than a week away, Governor Brian Kemp visited LaGrange to speak to supporters about the election and his campaign as the incumbent. Kemp spent his Wednesday morning at the LaGrange-Troup County Chamber of Commerce, trying to encourage people to vote as he rallies Republicans to vote for him over challengers like David Perdue.

Kemps said his campaign is a fight for the very soul of Georgia. He said his main mission on the campaign is to “make sure Stacey Abrams is not our next governor or our next president,” referencing his likely Democratic challenger in November’s general election.

Several members and candidates of the local government were present to hear the governor speak, including Major Jim Thornton, Sheriff James Woodruff, Commission Chairman candidate Phil Nations and many others. Thornton was proud to welcome Kemp to LaGrange, saying that his leadership has been very effective for the last three and a half years and that Georgia was “in the best shape it has ever been in.”

During his speech, Kemp spoke about the state’s progress over recent years through major events like the pandemic and how he continually chose to support local businesses and people’s freedoms to make their own choices, despite heavy criticisms from political opponents such as Abrams.

He noted that he understood the struggles of running a local business during the pandemic.

“I have been to places like Charlie Joseph’s, and I know that they cannot make it if they are only doing takeout or delivery. I was listening, and that’s why I stuck to my guns and plowed through with the reopening.” Kemp said.

In addition to discussing the struggles of the pandemic, Kemp spoke about what he called Georgia’s successes in economy and government. Kemp said that Georgia’s economy left extra money in the budget, and he said he wants to send money back to taxpayers instead of making up new projects. He also noted a temporary suspension of the gas tax to help citizens “fight a 40-year high Biden inflation.”

He spoke about his future plans as well, including looking at military retirees’ tax cuts and continuing to support small businesses and local farms. He also wants to continue progress with his education protection agenda, referencing the recent legislation against classroom indoctrination and divisive curriculum.

“We want kids to learn the history of our state and our country; the good, bad, and the ugly,” Kemp said. “We just want it to be the truth about history, not somebody’s version of it, somebody’s ideology.”

Kemp said that he is focused on continuing work for Georgia and returning to the office of governor. He spoke about the democrats and the struggle against democrats like Abrams, but also noted that the here and now is a primary and the first step to re-election.