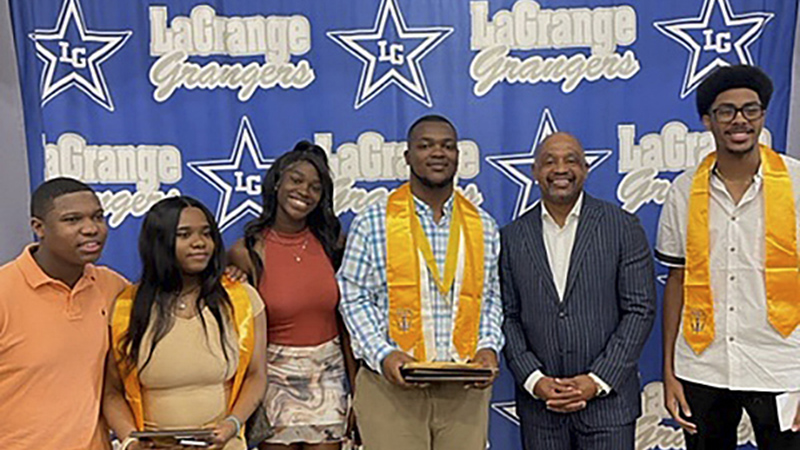 LaGrange native Tim Wilkerson has had a very successful career with Home Depot, and now he’s working hard to give back to his hometown.

Wilkerson, the senior vice president of the company’s services division, started a scholarship last year to give back to students at LaGrange High School.

“I know the struggle if you don’t have the means, and college is really expensive,” Wilkerson said.

“I want to be able to give back. This comes directly from my working at Home Depot. It has afforded me the ability to be able to do this.”

Wilkerson, who was raised by a single mother, said he had been all over the country serving on nonprofit boards, but he wanted to give back to his hometown. That idea was amplified after his mother passed away in 2020.

“I really wanted to do something to recognize her legacy, and the impact she had on my life. I’ve been doing all this work everywhere I’ve lived, but I needed to come back and do something in LaGrange and give back to the community that helped raised me,” Wilkerson said.

Wilkerson’s story is one that he said people wouldn’t believe, given where he is now.

He said he grew up in what is now the Brookside Terrace neighborhood in LaGrange, crediting family members and community members for helping his mother raise him.

His mother worked at Milliken for many years, while he attended both LaGrange Boys Junior High School and eventually LaGrange High School.

“When I was at LaGrange High School, I was on the free lunch program,” Wilkerson said. “To go from being a student in the high school on a free lunch program, to come back in this school and give out scholarships — it just gives me goosebumps. It’s just a blessing.”

Wilkerson earned a football scholarship to Georgia Southern. He said that’s the only way he could’ve gone to college.

“I’ll tell you, I wouldn’t have gone to college if I wasn’t on a football scholarship,” Wilkerson said.

“My mom could not afford to send me to college. There’s no way.”

He credits the lessons learned in sports for helping set him up for a successful career.

After college, he worked at Walmart and Best Buy for a few years. Then, he saw a job posting for Home Depot in the Atlanta Journal-Constitution, and it’s been one of the best decisions of his life.

He celebrated 26 years at Home Depot this month. He said the company’s values align with his personal values, so it’s been a great match.

The scholarship fund is already growing, as it nearly tripled after being $10,500 last year. Now, he said there’s much more in the pipeline.