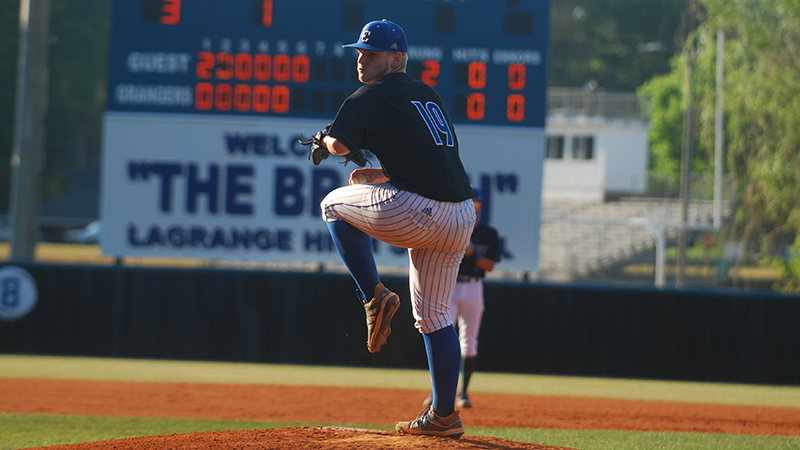 Caden Wood delivers in big moments. The soon to be 15-year-old freshman has been lights out in three straight game threes for the Grangers.

“There was never a doubt with him,” said senior leader Turner Cook. “Whether it be regular season or playoffs, he’s dominated. You wouldn’t even know he was a freshman if you walked up and watched him pitch.”

The first game three against Flowery Branch saw Wood put in a solid game, but it was not his best work. It gave only a glimpse of what was to come. Wood pitched five and 1/3rd innings and only allowed five hits and three earned runs on three strikeouts. The best was yet to come.

“We have a 14-year-old pitcher that threw three straight great game threes in the playoffs,” Head Coach Donnie Branch said.

The second outing on the mound in the playoffs saw an even more dominant display. Wood pitched a complete game shut-out and only allowed seven hits on two strikeouts. He is not the type of player that is going to rack up a large strikeout count but always seems to find ways to get his opponents to ground or fly out in big moments.

“I knew he was going to be good, but I didn’t know he would be this good in so many big spots,” Branch said. “I told the guys back in September and October ‘I know he doesn’t throw real hard, but this guy can pitch.”

Wood has been making a name for himself with this torrid tear through the playoffs this year. He saved his best performance until a crucial game three against Cedartown in the semifinals. Cedartown came into the game three with a 7-1 record in the playoffs, but Wood was unphased.

“I was in total command of every pitch,” Wood said. “I felt 100% confident in myself, and the defense behind me.”

Wood delivered a no-hitter in his six and 1/3rds innings of work on four strikeouts in the biggest game of the young man’s life. Any time he got into a spot of bother, he found his way out of it. When he was pulled in the seventh inning, the ace of the staff, junior Trevor Booton, threw one pitch and got a double play to seal the game and a championship berth for the Grangers.

“He was unbelievable, I couldn’t imagine anybody better,” Booton said. “Best freshman pitcher in the world.”

His coaches and teammates have been singing his praises all playoffs and instead of letting it feed his ego, Wood has stayed even keeled through it all. He is unfazed. The team might not even call on his services in the AAAA State Championship series, but if the series goes to three games, the Grangers will likely call on their red hot freshman pitcher.

The kids are super confident going into game threes,” Branch said. “When we get to a game three, we feel good. We feel like we can beat anybody because he’s been outstanding.”

He’s 3-0 right now in the playoffs,” said senior leader Colton Esposito. “With him on the mound, we’re always confident.”