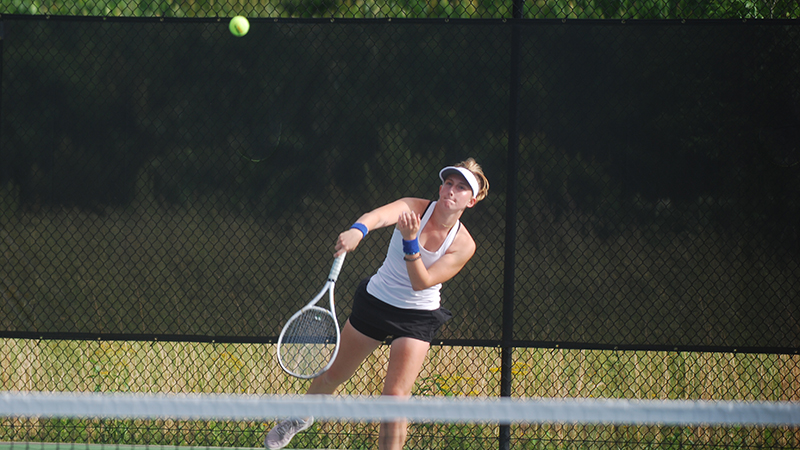 “I was happy with my performance,” Nix said. “I played better Saturday than I have all season, and I think my score doesn’t reflect how I played.”

Nix was down in her final match but did not officially suffer a loss as she was pulled as the Grangers had already lost a majority of their lines, 3-0. That means Nix finished the season with a spotless 21-0 record this year. She was practically unbeatable, which is not something she was expecting heading into this season.

“You have to be a lot better than her to beat her,” Head Coach Kenny Moore said. “She’s not going to beat herself.”

“It was unexpected, especially because I was switching to singles,” Nix said.

This was Nix’s first season playing singles after being a doubles player to start her career at LaGrange High School. This suits her more because the pressure is on her to perform for herself rather than a teammate.

Nix has thrived in her new role as the team’s no. 3 singles player. She was behind seniors Adeline Lanier and Sydney Edelson in the team’s pecking order but is likely to see that change next year when she is the most experienced singles player on the roster.

“I really looked up to Adeline and Sydney’s game,” she said. “Their hard work inspired me to work hard.”

The team had fantastic senior leadership on the team as they had four seniors including Maddie Nolen and Ayaka Kimura along with Lanier and Edelson. Nix looked up to all four girls and will look to fill the leadership role next year as a senior.

Nix is always optimistic heading into any match. She never feels overmatched regardless of her opponent.

“I try not to play cocky, but I’m confident in myself,” Nix said. “Anything is possible even if it seems like it’s not.”

Nix did not start playing tennis until the sixth grade but now she is one of the best players in AAAA in the state. She has added an array of different shots and varies them now more than ever to keep her opponents off guard. Nix takes private lessons in the offseason to work on her game. This offseason she plans to work on her shot placement as she becomes an even more well-rounded tennis player.

Next season will be tougher for Nix as she takes on even more responsibilities with the team. She will be looked to as the leader of the team and will more than likely have to take on the opponent’s no. 1 singles player next year. This will be a challenge for Nix, but it is a challenge that she is looking forward to.