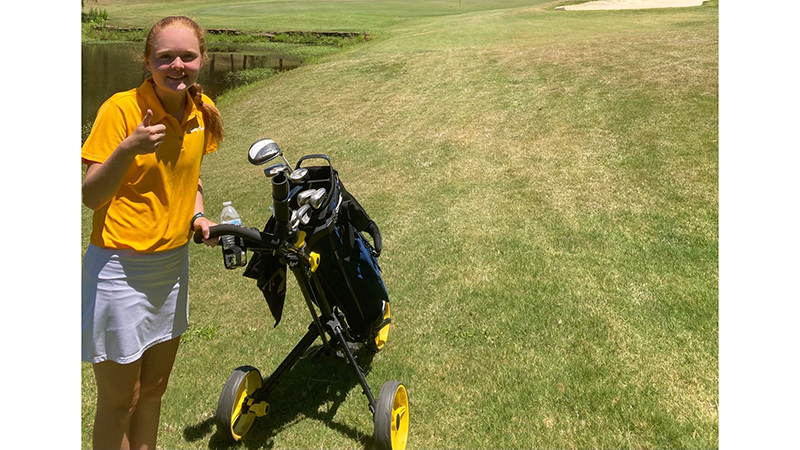 The Troup girls golf team finished in seventh place at the AAAA State Championship on Tuesday.

“To have three inexperienced golfers coming into the season and go up there for state and compete like we did and come out seventh is a testament to their grit,” said the Head Coach of the golf team, Sgt. Kevin Jefferson.

Sarah Blanks, a senior, starred in her final golf tournament as a Tiger. Blanks was outstanding in round one with a team low score of 98 before putting in an even better round of 88 on day two. Blanks has been the leader of the team with her play on the course but also with her ability to pick up others around her.

“We were excited to go to state because it’s a big accomplishment, but there were also some nerves as well,” Blanks said.

The team settled down a bit on day two as the nerves subsided. The team combined to shoot 11 lower on day two than day one. Blanks improved her score by 10 strokes, but it was Skyler Yates who cut her score the most from round one to round two as she shot 11 strokes lower on day two.

“She was bombing the ball,” Jefferson said. “She was hitting the ball extremely well.”

Hailey Proulx, a senior, also enjoyed her final tournament as a Tiger. She went 122 the first day and 127 on the second. She was outstanding and nearly hit a hole in one on the fourth hole on the second day, an achievement she is particularly proud of.

“My second day, I feel like I didn’t do as well,” Proulx said. “The hole is actually over water, and it was kind of scary playing it safe. I was going to play it safe, but I’m happy I went over the water and nearly got a hole in one.”

The happiest individual to see that shot was assistant coach Paul Hammock who witnessed the shot and had to tell Jefferson ASAP.

“Coach Hammock quickly texted me and said ‘look Hailey almost got a hole in one,’” Jefferson said.

For Faith Horton, this was her first taste of playing in the state tournament. She ended up shooting a 154 in the first round and a 146 in the second.

“For my first time being at state, I’m happy that we finished seventh,” Horton said. “There were a lot of teams there and the competition was very tough.”

Horton has only played golf for around three months now and will be coming back next year as she enjoyed playing with her teammates and for coach Jefferson. This was one of her first experiences playing a full 18 holes in one day, and she had to do it on back-to-back days.

Eris Whitfield was the fifth player on the team, and she shot 149 on the first day and 162 on the second. Whitfield was one of the other first year golfers that improved as the season went along.

“I felt like I did worse the second day, and I think that had to do with the fact it was hotter,” Whitfield said. “I’m still very happy that I helped contribute.”

Jefferson took on a lot of responsibilities during his first year as head coach of the boys and girls golf team. The experiences he had with these girls has convinced him to give it another go next year.

“This girls grabbed the bull by the horns,” Jefferson said. “I’m so extremely proud of them, and I can’t wait to see what we can do next season.”