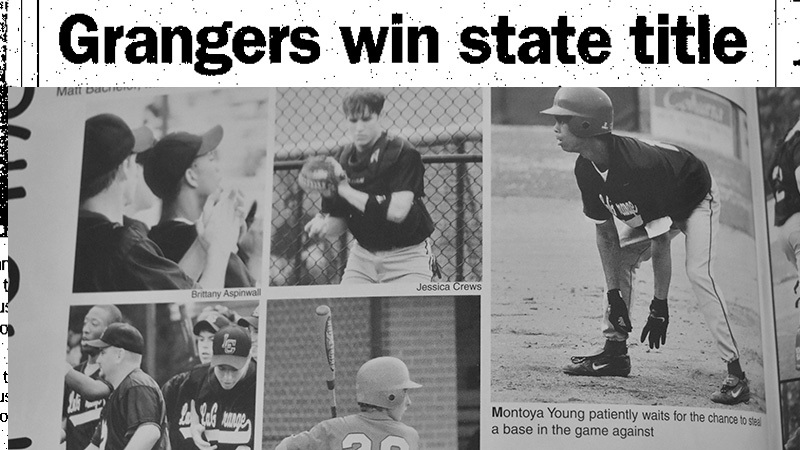 Going into Friday, it has been 6,557 days since the Grangers lifted the only state championship trophy in their storied baseball legacy. That could all change in the next few days as LaGrange High School plays for the state title in Rome on Friday with a potential game three on Monday.

Nearly 18 years ago the story was similar in many ways but also quite different. The team is still led by Donnie Branch who retired in 2012 only to return six years later. Now, the team is once again poised to try and bring a state title back to LaGrange.

“When I heard he was coming back, I said ‘that is great news for LaGrange as a whole and the baseball program,” said Kory Noles, who was a senior on the ‘04 team.

Much like the team now, the ‘04 Grangers team was led by their stable of pitchers. None shined as bright as Noles, who won the state player of the year. He made up a formidable collection of pitchers alongside Josh Edmondson, Brandon Monk, Drew Murray and Jeffrey Henderson that helped power the Grangers to a state title.

“We were highly competitive,” Noles said. “We made each other better. We always pushed each other.”

Edmondson pitched a complete game in the Grangers 4-1 win in game one of the series before coming in late in game three to get the win to seal the title for the Grangers.

Noles got the start in game two where the Grangers let a late lead slip. Noles was also outstanding at the plate as the designated hitter. He had a big game three in the state championship with a home run. He also had the game winning RBI with a single in the sixth inning, sparking a three-run inning for the Grangers that gave LaGrange a 13-10 victory.

Kelton, who was just a freshman at the time, cherished the fact that Branch trusted him in such important games for the Granger despite his youth.

LaGrange was able to host the championship series back in 2004 and when the Grangers got the last out the biggest dogpile in LaGrange High School history commenced. Fans leaped over the walls and piled onto the players as the team was able to win the game in front of well over a thousand of their local supporters.

The current Grangers have also been led by stellar pitching. Trevor Booton, the junior ace of the staff, has been lights out as the Auburn commit just continues to get better. Trey Cook gets the starts in game ones and has a bright future ahead of him at the next level, but it has been the play of Caden Wood, a freshman, who has been generating the most noise. Wood is fresh off a three straight game three wins capped off by a no-hitter in the semifinals against Cedartown.

“What I think is most impressive is the 15-year-old pitcher,” Murray said.

That championship-winning team was loaded with talent. Kelton played five years at Alabama while Noles went to Columbus State for four years before playing in the minor leagues for three years. Murray found himself playing baseball at Georgia Southern. Monk was a seventh round pick in the 2005 MLB draft and enjoyed a career in the minor leagues. Edmondson played at the University of Florida and Matt Olson, an outfielder on the Grangers, went to the University of Georgia. Andrew Manning, an infielder, played college baseball at the University of Alabama at Birmingham.

The ‘04 team has dispersed across the country since that fateful night nearly 18 years ago. Kelton has found himself in Birmingham, Alabama, but has attended multiple games this season. Murray now  resides in Dallas, Texas where he has kept up with this year’s team by reading the paper. Noles finds himself back in LaGrange after his baseball career ended and has attended every series of the playoffs so far, except the semifinals. Noles even has a connection to the current team as his nephew, Gryson Cokcrell, was one of the starting outfielders for the Grangers until he suffered a season ending injury in the playoffs.

The current Grangers have walked a slightly different road to get to the championship series. The ‘04 team had waltzed to the series and did not experience a game three until the championship. The current team has been in game threes in the round of 16, the quarterfinals and the semifinals.

“That one in 2004, we were better all year,” Branch said. “We were ranked one or two all year, and we had been in the final four the year before so it was completely different. This year was more of a blindside, but it shows what we can do if we do things right.”

The teams have different feelings to them, but each had the same goal — win a state championship. The ‘04 team was able to ride a dominant pitching staff and some timely hitting to win the only baseball state championship in program history. Now, the team is led by an elite pitching rotation and some timely hitting from the offense to make it to their first championship series in 18 years. While many things have changed, some are not so dissimilar.