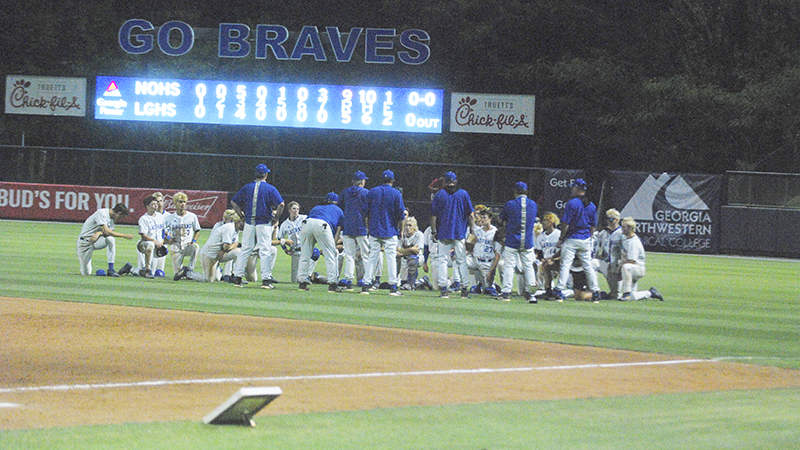 The LaGrange baseball team fell just short of winning their second title in their long and storied history. The Grangers dropped two back and forth games in the AAAA championship Friday night to North Oconee, seeing their season come to an end as state runners-up.

LaGrange lost game one 3-2 on a walk-off by North Oconee, and game two 9-5 after a late rally by the Titans.

“I want to win for them,” head coach Donnie Branch said. “What they did today and what they did all year made me proud. We went toe to toe with the no. 6 team in the country.”

Game two saw the Grangers take a quick 1-0 lead in the second inning when Cooper Stephens, a freshman, hit a sacrifice fly to send a runner home.

The Titans answered back with five runs in the top of the third inning to take the lead.

North Oconee’s lead did not last long as the Grangers scored four runs in the bottom of the third inning to tie the game up. Zack Thompson got the rally started with an RBI single. Cooper Stephens stepped up to the plate with the bases loaded and delivered once again with a bases-clearing three-RBI double to tie the game.

“Cooper was big for us,” Branch said. “He has been big so many moments this year as a freshman.”

The Titans retook the lead with a run in the top of the fifth. The Grangers looked like they were going to tie the game in the sixth, but Turner Cook was tagged out making a break for home on a wild pitch to end the inning.

The Titans added on three more runs in the top of the seventh to stretch their lead out and take the winds out of the Grangers’ sails.

“We were battling, but it felt like that was a real gut punch to the kids,” Branch said.

The Grangers could not mount a rally in the bottom of the seventh and saw their season come to an end.

“It’s a tough loss but knowing all that we accomplished makes me proud,” said senior leader Turner Cook.

Trevor Booton got the start on the mound in game two and was not quite his normal, dominant self. Despite this, he still only allowed seven hits and three earned runs on seven strikeouts. Robbie Parker came in to relieve him and pitched two innings, allowing three hits and zero earned runs on two strikeouts.

Stephens was the star on offense for the Grangers in game two as he went 1-for-2 with four RBIs. Thompson had a solid game as well going 1-for-4 with an RBI and a run scored.

For Thompson, Esposito, Turner Cook, Austin Skiff and Ben Alford, this was their final game in the Granger blue.

“All five of our seniors were great this year,” Branch said. “They were great all year.”

The Grangers doubled their lead in the following inning on a monster RBI double by Stargell. The hit would likely have traveled right over the wall in Granger Park, but the bigger outfield in AdventHealth Stadium kept the ball in the park.

It was heartbreak in the seventh inning for the Granger faithful as the Titans rallied.

Bryce Toci tied the game with a powerfully hit double that cannoned back off the wall with one out. Justin Byrd followed this two batters later with a sacrifice fly that brought in the game-winning run.

Trey Cook got the start on the mound and had a good showing despite the rough seventh inning. Cook only allowed five hits and three earned runs on five strikeouts in his six and 1/3rd innings of work. Freshman Caden Wood came into the game in the seventh and only threw five pitches and allowed one hit.

Cook also had the best performance offensively for the Grangers as he went 2-for-3. Stargell went 1-for-3 with an RBI. Parker got the only other hit for LaGrange as he went 1-for-3.

The Grangers are still a young team with nine freshmen on the varsity team this year.

While they will miss the leadership of the five seniors, this is a solid building block for the Grangers going forward. The team will return their top three starting pitchers as well.

“I loved growing up with the guys,” Turner Cook said. “I’m almost a dad to some of these kids.”

LaGrange ends the season with a record of 31-12. The team fell just two wins short of lifting a major trophy.

“We’re super young,” Branch said. “We will look to reload and hopefully be back in the years to come.”