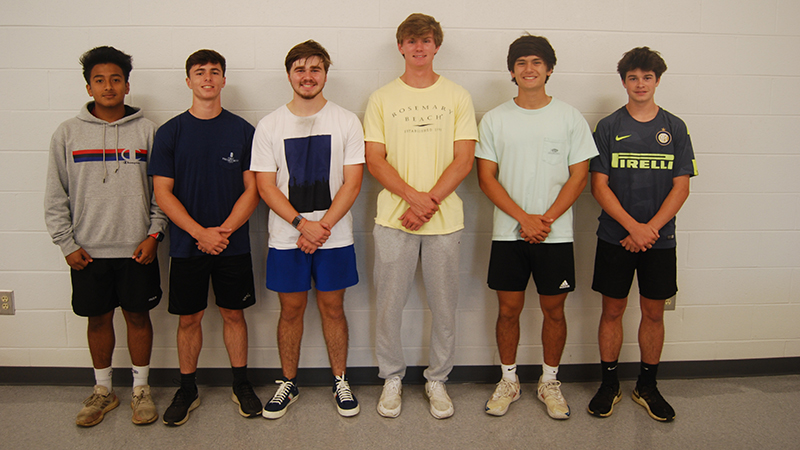 The LaGrange boys soccer team had eight players named to the all-region teams after a sterling 2022 campaign. That included four members on the first team – Davis Knight, Tripp Hollstrom, Miller DeVane and Noah Whipple. Jan Alvarado, Andy Patton, Bryce Kuhn and Logan Metcalf all made the second-team for the Grangers.

Knight was the top assist man and goal scorer for the Grangers this past season and will be embarking on his senior season as a Granger next year. Knight played provider so often that he ended up tied for seventh in the state in assists regardless of classification with 22. He was outstanding in and around the 18 yard box this past season and will be looked up to as a senior leader for the team next season.

“Most people work hard to get here, but it’s only the hardest of workers that get this honor,” Knight said.

Hollstrom was a leader for the team and in many ways was the heartbeat of the Grangers soccer program during his time as a member of the team. A natural goal scorer, Hollstrom made the sacrifice to move into the midfield this season to help benefit the team. It was not always easy for him, but his stats did not suffer much as he was the team’s second highest goal scorer and second on the team in assists. He turned into quite the playmaker for the Grangers as his 21 assists tied him for ninth overall in the state.
“It’s a big accomplishment,” Hollstrom said. “It’s something I’ve done every year since I was a freshman.”

“It’s something I’ve wanted to do for the past two to three years since I’ve been with varsity,” DeVane said. “To get that honor shows all the hard work I’ve done.”
Whipple was the final member of the Grangers on the first team. Whipple could play any of the positions in the midfield or along the backline. Whipple’s versatility was just as important to the squad as Devane as the team had to deal with suspensions and injuries throughout the season. This was Whipple’s final season in the Granger blue, and he was ecstatic to make the all-region team before going on the next stage of his journey.

“It’s a big accomplishment for me,” Whipple said. “It’s something I strived for since I saw it as a freshman and it’s rewarding to see my hard work get noticed.”

Alvarado sliced and diced defenses with his quick play from the wing this past season. His ability to play either wing position and provide service to the other front players as well as chip in some goals was pivotal to the Grangers 2022 season. He is only a junior but has already flashed a lot of potential in the final third. His growth and abilities will be even more important to the team next year as the Grangers look to replace seven seniors that will be graduating next week.

“I’ve learned lessons this year about putting in hard work,” Alvarado said. “This gives me something to build off of going forward.”

Patton is also one of the players that will use this all-region honor to help boost them into their final season. Patton slid into the starting lineup this past year as a midfielder and made the most of his opportunity. Patton ended the season with six goals and five assists and was able to contribute defensively as he helped to break up many counter attacks over this season. After playing sparingly with the varsity team last year, Patton is now one of the first names on the team sheet for the Grangers.

“It wasn’t really something I was expecting,” Patton said. “It was something I thought I might be able to make next year, but I was surprised to see myself on the team this year.”

Kuhn was a stalwart at the back for the Grangers, but his aerial prowess was essential for the Grangers attack this season. Kuhn scored four goals as his ability to latch on to headers was massive for the Grangers. It was not just his scoring that he provided offensively, his ability to hurle to ball into the box on long throws helped him earn eight assists this past season. His ability to create offensively is what really propelled him into the all-region team despite being a great defender as well. His height and ability to scramble the ball out of his team’s 18 yard box will be missed mightily next year.

Metcalf was the final member of the all-region teams for LaGrange and was also one of the many seniors on the team that will be departing next week. Metcalf was another major piece along the backline for the Grangers as the team will be having significant turnover at the defensive positions next year. Metcalf was also one of the leaders on the team and is sad that his time playing and mentoring the younger guys has come to an end.

“I will remember my teammates the most as it was fun growing up and playing with them,” Metcalf said. “It means a lot to me that I was one of the players selected and that I had many teammates selected with me.”