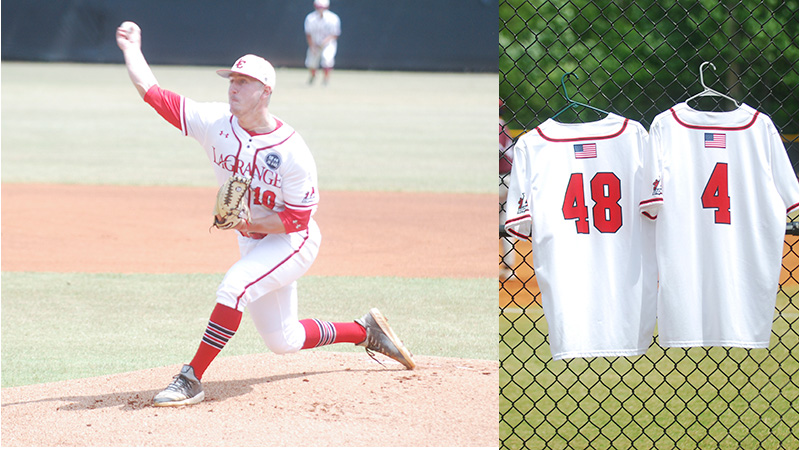 Fourth-ranked LaGrange College staged a last inning rally for a 9-7 win over Centenary in Game 2 of the LaGrange Region on Saturday at Cleaveland Field in Williamson Stadium. Earlier in the day, the Panthers took Game 1 by a 7-3 score to take a 2-0 lead in the best-of-five series in the regional round of the NCAA Division III Baseball Tournament.

The Panthers are coming off a difficult week that saw the loss of team members Stephen Bartolotta and Jacob Brown and LaGrange native Rico Dunn in a car accident last Saturday. The trio was recognized with a moment of silence before Game 1.

Game 2
The Panthers (39-6) were the visitors in the game and came to the ninth inning trailing 7-6. Parker Primeaux (9-6) struck out the first two batters of the inning. Rhett Mixon fell behind in the count and the Panthers were down to their last strike. Mixon beat the Gents’ shift with a base hit through the left side to keep the inning going.

McKinley Erves jumped on Primeaux’s first pitch with a double into the left field corner as Mixon came all the way around from first to tie the game. Joe Ruth was intentionally walked and both runners moved up on a wild pitch. Jack Layrisson lined a single into center to score Ruth and Erves for a 9-7 lead. The inning before with LC down 7-4, Layrisson brought the Panthers within one with a two-run single.

Cael Chatham came on in the ninth. Chatham struck out the leadoff batter, but the Gents (27-18) got back-to-back singles. Mixon ran down Preston Ludwick’s fly ball to right center for the second out. Chatham got Ben Bridges to line out to right for the final out and record his third save of the season.

Dalton Brooks started for LC and pitched into the sixth. He allowed seven runs, five earned; while walking one and striking out four. Tanner Chaffin (1-1) pitched two scoreless innings to pick up the win.

The first four batters in the lineup, Mixon, Erves, Ruth, and Layrisson, accounted for 10 of the Panthers’ 11 hits, all nine runs, and had seven RBIs. Mixon and Ruth each had three hits in the game.

Game 1
The Panthers got eight strong innings from Baley Coleman to take the first game of the day. Coleman (10-1) scattered 10 hits, the three runs, did not walk a batter, and struck out seven. Chafin retired the Gents in order in the ninth.

The Panthers got a run in the first as Mixon scored as Layrisson ground out. In the third, Ruth’s two-out RBI single brought home Erves, who had doubled.

The Gents cut the lead in half on Bridges’ solo home run in the fourth inning. The Panthers got the run back in the bottom of the inning. Chatham led off with a single and scored on Rhett Hebert’s sacrifice fly.

LC broke the game open with four runs in the seventh. Chatham capped the inning with a two-run double down the right field line for a 7-1 lead.

Chatham and Ruth each had three hits in the game. Erves had two hits, scored two runs, and had an RBI.