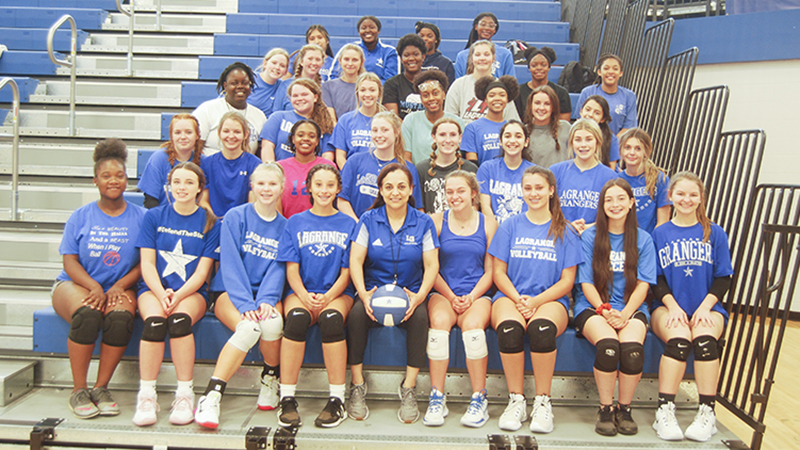 The LaGrange High School volleyball team has found its new coach in one of their own, Alma Barrientos — the JV coach for the last eight years. It is a big promotion for the newly cemented head coach, who will oversee the entire volleyball program for the first time in her career.

If anybody is up to the task, it is Barrientos. She has worked with a ton of volleyball players during her time as the JV coach. The players are excited for her to be the head coach as well with around 60 students coming in for tryouts. This has led to the hardest part of her new role so far — having the final say on who gets cut.

“It was tough because we had so many girls try out,” Barrientos said. “All of them were beautiful girls trying to learn the game.”

Barrientos hopes to keep these girls around the team by making them managers and attending summer camps. She does not want this to be the end of volleyball for these young girls that were cut.

This is one of the major ways Barrientos hopes to grow the program.

She will have a freshman, JV, and varsity team during her first year comprised of around 40 students combined.

She is encouraging as many young volleyball players — including the ones that made her teams — to come to her summer camps that will feature college coaches from LaGrange College and Point University among others.

Barrientos has a long history with the sport. She was first introduced to the sport as a young girl in Mexico and in a land where soccer is king, Barrientos found a different calling. She was passionate about soccer, but volleyball is where her heart is. Years later and in a completely different country, Barrientos is getting to teach the game she loves to an entire program of young girls.

“The game has changed since I played,” Barrientos said. “International rules are completely different, but I love to learn about the game. I love our players, and I love seeing them grow.”

Barrientos brings a wealth of knowledge about the game and her grasp of the widely different rule sets among the different governing organizations of volleyball will give these young players a perspective they likely have never had before.

Legendary LaGrange tennis coach Kenny Moore has been her guide through this change in her life. He has helped prepare and mentor Barrientos for all that comes with running your own athletic program at LaGrange High School.

All that she has learned from the various coaches in her life she will now be passing on to all of her players at LaGrange.

She was not presented with the opportunity to play at the college level, but she hopes to open that door for all the players that will come through her program.

“I didn’t have the opportunity, and I didn’t have somebody say “hey, you can do this,” Barrientos said. “Now that I see these girls with so much potential I just want to be like, ‘Hey girls keep going!”