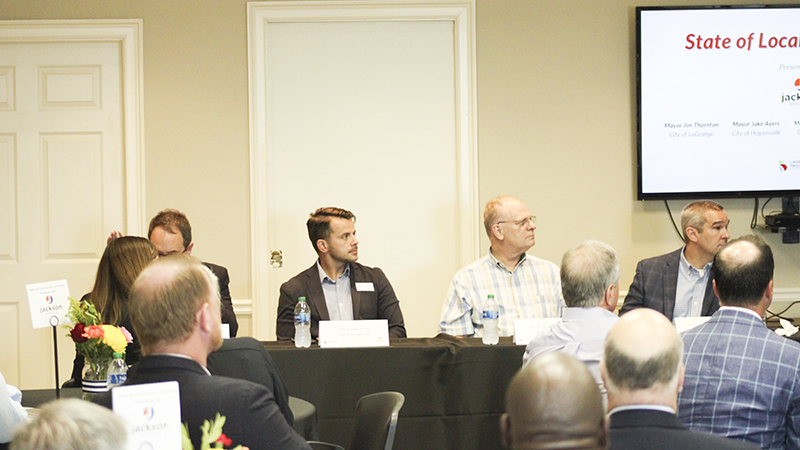 Growth was a big topic of conversation at this year’s State of the Community forum on Monday.

The forum, which featured LaGrange Mayor Jim Thorton, Hogansville Mayor Jake Ayers, West Point Mayor Steve Tramell, and Troup County Manager Eric Mosley, focused upon the future of the local communities, particularly in regards to growth and infrastructure. All three of the cities are experiencing an increase in population, primarily in response to increased traffic coming down the I-85 corridor from Atlanta, as well as up the corridor from Columbus.

Ayers elaborated on this notion, explaining how the influx of traffic from outside the area is causing the population to grow at an exponential rate.

“The growth that is coming is very unique in the regard that it’s coming from outside of the county. We may see the same percentage of growth that places like Newnan saw over the course of 15 years in the course of a five-year period, and that is pretty unprecedented,” Ayers said.

With such a population boom, all three of the cities, as well as the county, are working to ensure that there is enough housing. Tramell discussed several new apartment complexes coming up in West Point, as well as their continued efforts to bring in developers to continue expansion.

Likewise, Thornton discussed the importance of externally supporting the development of housing with outside amenities.

“We have several parks and trail initiatives that are helping to support our growth in LaGrange, including the continued expansion of the Thread and the development of the new Ridley Lake park,” Thornton said.

Thornton also discussed how city infrastructure played a large role in preparing for a large population.

“I think it’s important to note that cities don’t build houses, cities don’t own houses. What we do is support the business community, we support you,” Thornton said.

“The way we do that is by having high-quality infrastructure. While this could be in reference to roads or utilities, when you are talking about housing, the biggest focus is on water and sewage.”

All three mayors agreed on this notion, and Ayers specifically discussed how Hogansville was working to address the issue.

“I want to make sure that the population growth that we are about to experience, particularly in Hogansville, is sustainable. This means having a proactive plan. If you have been to Hogansville, you know we are in dire need of better infrastructure, and we are investing a lot into our water system,” Ayers said.

While no one is certain what is to come to the community in the next five to ten years, the future looks bright.

“There are big things coming to our community, and we are all working hard to get ready,” Trammell said.