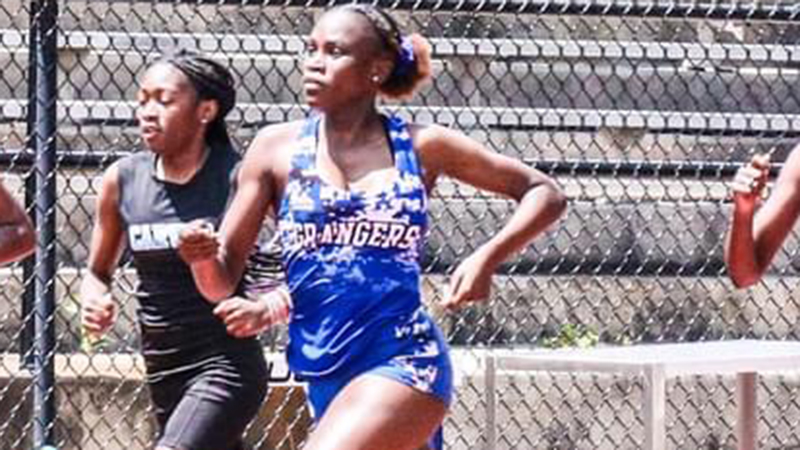 It was another long campaign for the LaGrange girls track team that culminated in four Grangers  Katelyn Moore, Alyssa Rhaney, Ivorie Smith, and Christy Thomas — going to the AAAA state championships earlier this month.

One of those athletes that set a new bar for themselves was the senior Ivorie Smith, who participated in the 400 meter dash at state where she finished in ninth place.

“Ivorie broke two school records,” Sheffield said. “She broke the record for the 400 meters at state and had previously broken the record in the 300m hurdles.”

Smith is a senior that will be departing for Clayton State University to run cross-country and track in the fall. She was one of the senior leaders on this year’s team as the program is going through a bit of a rebuilding program.

“They look up to me because I’m a senior,” Smith said. “I just wanted to be positive and uplift everyone.”

“I’ve felt like I’ve accomplished a lot here,” Smith said. “I was out there enjoying the moment.”

Thomas, a junior,  finished in sixth place in the discus throw at state. Thomas has the potential to improve her range going into her senior year. This was her second year throwing the discus, which was an improvement on her sophomore campaign. Finishing sixth place among all AAAA discus throwers is no small task.

“I was happy with my throw because I placed and not many people place at state,” Thomas said.

“She has so much potential,” Sheffield said. “I think next season she will be higher up on the podium.”

The nervous energy began to sink in Thomas as state, but she was still able to unleash a throw of 99 feet and four inches.

“I felt like it was a good experience, but I messed up a little bit,” Thomas said with a laugh. “I feel like my nerves got the best of me.”

Thomas enjoyed her time at state so much that she plans to work ever harder this summer to improve her game. She wants to place even higher in her final season as a Granger.

Moore finished 11th long jump and ninth triple jump at state. It was a big year for Moore who showed how versatile she is as a track and field athlete.

“She had an amazing season,” Sheffield said. “Overall, she was excellent in the triple jump and long jump.”

The junior will be one of the team catalysts again in her final season next year.

Rhaney, just a sophomore, improved on her 13th place finish in the triple jump a year ago as she was able to 12th this year. She jumped over three inches further than her first appearance at state.

“I feel like maybe I could have done a little better, but I put my all out there,” Rhaney said.

After two appearances in her first two years as a high schooler, Rhaney has eyes on making state every year as a Granger.

This was a rebuilding year for the girls track team at LaGrange. The number of participants were down a little this season, but Sheffield has eyes on getting more girls out for the program next season, but for now she is content getting three girls this big meet experience so they will be better prepared when they come back next year.

“It’s important for all the girls to see that this is the final stage and the end goal for the whole season,” Sheffield said. “It’s a long season, but that is what we are working for all year.”