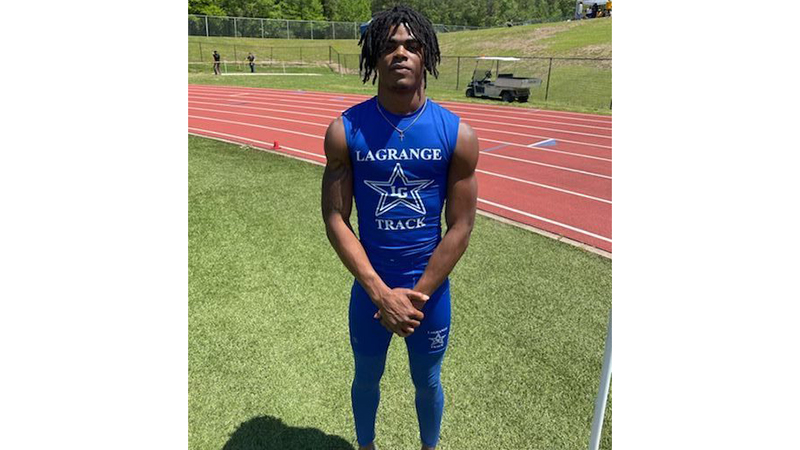 The LaGrange boys track team went through a rebuilding year in 2022, but the program was still able to send three athletes — Amos Scott, Montavious Martin and Christian Ector — to the AAAA State Championships on May 12-14.

“We knew it was going to be pretty tough,” head coach Thomas Cox said. “The three guys were all seeded last.”

“It was difficult going into the season. We actually did really well comparatively speaking to what I thought we would be able to do.”

Scott, a senior, finished 15th in the 200-meter dash at state. His time of 23.06 seconds was the third fastest he has ever run the 200-meter in his career at LaGrange.

“If he ran the fastest time he had ever run he’d still have finished in 14th,” Cox said. “The competition for him was very stout.”

Scott’s impressive Granger career comes to a close as the team will look to replace his leadership next season.

Martin, a senior, also competed for the Grangers for the final time at state earlier this month. Martin competed at the long jump and stuck a jump of exactly 20 feet to finish in 12th place.

“He actually scratched on a jump that would have got him third,” Cox said. “He just barely scratched. Those kinds of things happen.”

The margins at state are so fine that Martin could have easily been on the podium, but instead had to settle for a 12th place finish.

Ector competed at state in the pole vault this year as just a junior. Ector was able to clear the 10 foot bar to earn a 14th place finish.

“He actually cleared a height he’s only cleared one other time,” Cox said. “Ector actually gained 20 pounds from last year to this year and in the pole vault that is a huge difference.”

The team had two eighth graders that would have qualified to go to state, but they were too young to go. The Grangers will only be returning one athlete that has any state experience next year, Ector. With an influx of younger track and field athletes in the wing, the program should be fine going forward.

“Fortunately, we have some young guys coming up that can replace the outgoing seniors,” Cox said. “It’s going to be good for us, and it won’t hurt as bad losing these guys.”

Cox, who’s first year in charge was 2020, has eyes on a big year next season. After finishing second in the region last year and third this year, Cox wants his squad to win the region. The team took 32 athletes to the region championship this year and had 58 total varsity athletes, but only three qualified for state. The numbers for the program were down drastically last year due to COVID-19 as the team only had 30 varsity boys athletes. With the program trending in the right direction, Cox sees the potential for his program to send even more athletes to state next year.

“I think the progression of getting young guys in is going to help us in the future,” Cox said. “Going forward, I believe we’ll be more competitive as a team not just as individuals.”