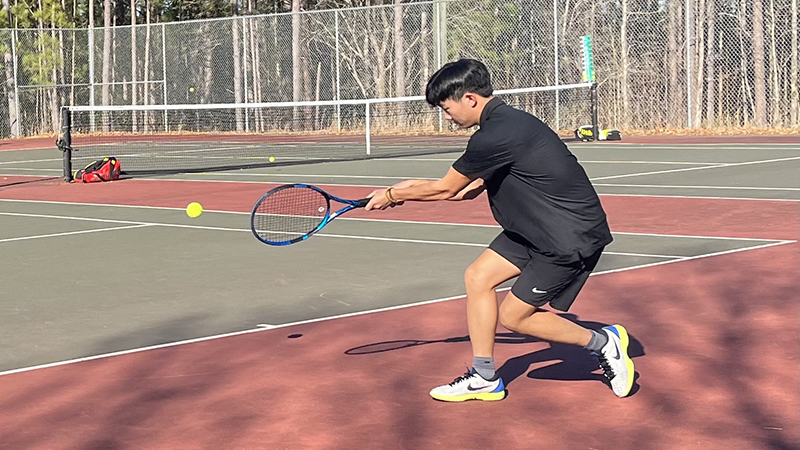 Alex Cho enjoyed an undefeated senior season for the Callaway boys tennis team this year as he went a perfect 17-0.

“I tried to promise myself before the season I would not lose any matches,” Cho said. “As the no. 1 singles player at Callaway I felt like if I lose that people will get discouraged.”

Cho was so dominant that his only loss came during his freshman year in the quarterfinals of the state tournament. Cho compiled an overall record of 84-1 during his time at Callaway which cemented him as one of the best players in the program’s history. Even as a freshman, he was already the team’s no. 1 singles player– a distinction that he kept all four years while he was a Cavalier. Cho went undefeated during his sophomore, junior and senior season as he proved to be one of the most formidable tennis players in AA during his time at Callaway.

“Alex is such a great representative of Callaway on and off the court,” tennis head coach Lisa Hernandez.

Cho was one of only two players on the boys team to have any experience playing tennis going into this season. He was already a leader for the team, but had to step up even more so this year with so many inexperienced players on the team.

“Everytime we practiced I tried to help and point something out from each player’s form or style,” Cho said. “I just did my best to give them tips that could help them out.”

Cho was never too harsh on the younger players as they were growing to like a game he already fell in love with. He served as a leader on and off the court for players of all ages during his time with the Cavaliers.

Cho’s tennis journey began all the way back in fifth grade when his pastor first introduced him to the sport. It did not take long for him to fall in love with tennis.

“He tried to make tennis as interesting as possible,” Cho said. “He taught me how to spread joy through tennis.”

It looks like the ultra competitive state of his tennis career is coming to an end, but Cho plans to stay around the game for at least a little while longer.

Cho is now freshly graduated as he received his high school diploma on Thursday. He has plans to attend either the Georgia Tech to continue his academic career and envisions himself playing tennis with the club team at this university.

He is more than just a tennis player as Cho was also named salutatorian and is involved in the community through community service and the clubs he was a member of.

“He has been a great leader and example for the other players with his work ethic and sportsmanship,” Hernandez said. “We will definitely miss him and wish him all the best in his bright future.”