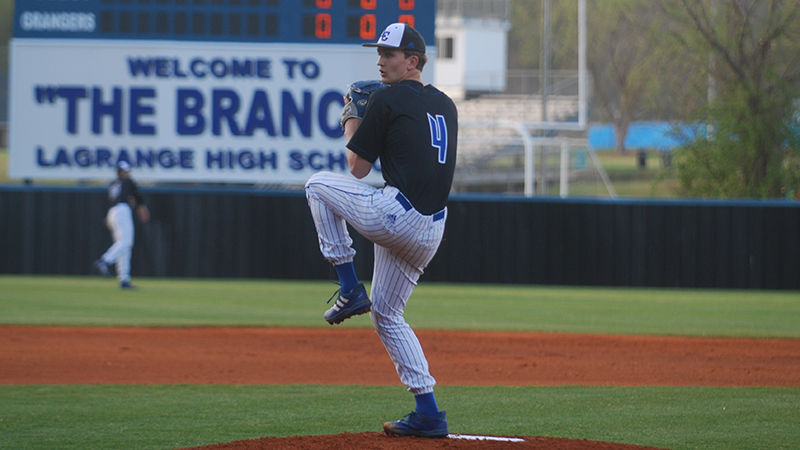 Fresh off a runner-up finish at the AAAA State Championship, the LaGrange High baseball players were honored once again as Trevor Booton and Colton Esposito were named Region 2-AAAA pitcher of the year and player of the year respectively.

Esposito was the Grangers starting third baseman and was an absolute menace at the plate for opposing pitchers to deal with.

“This year I was really looking to be first team all-region at third (base),” Esposito said. “When I saw I [was named player of the year], it took me off guard, I was shocked.”

Esposito should not have been so surprised as put up an impressive stat line. During the regular season, he hit .423 with an on base percentage of .500. He also tacked on a home run and 17 RBIs to his stat line to help garner him his first player of the year award. Esposito was not just a regular season stat stuffer, he delivered in the playoffs too with none more important than earning the winning RBI against Cedartown in game three of the state semifinals.

“It feels really good though, especially after putting in all that work,” Esposito said. “During the season, it’s a grind so it’s nice to know that my work paid off.”

Esposito was more than just an offensive threat as his glove at third base was essential for the Grangers defense. While the defense had its ups and downs this year, Esposito was consistently making quality defensive plays from third base.

Esposito will be graduating on Saturday morning and will be attending LaGrange College in the fall to continue his baseball career.

“Esposito was great this year,” head coach Donnie Branch said. “In a lot of ways, he was the heartbeat of this team.”

Booton, a junior, was the team’s ace pitcher this year as he led the team’s pitching staff all season. This was the first time Booton has been named the region pitcher of the year.

“It’s a big honor,” he said. “Columbus and Troup had some good arms, so it was a great honor to be named pitcher of the year.”

Booton was lights out this season as he compiled a 10-4 record across the regular and postseason play. He also accumulated three saves and 100 strikeouts en route to an impressive 1.7 ERA. Booton will look to be even more dominant during his fourth and final season as a Granger next year.

“It’s just about command and being to hide my pitches coming out of the release,” he said. “That will always be something to work on, and I want to throw harder too.”

Booton will be back for his senior season before departing for Auburn in the fall of 2023 to play baseball.

The year 2022 was extremely kind to the Grangers as they captured a region title and played in their first state title series since 2004 and now have the pitcher and player of the year for Region 2-AAAA.