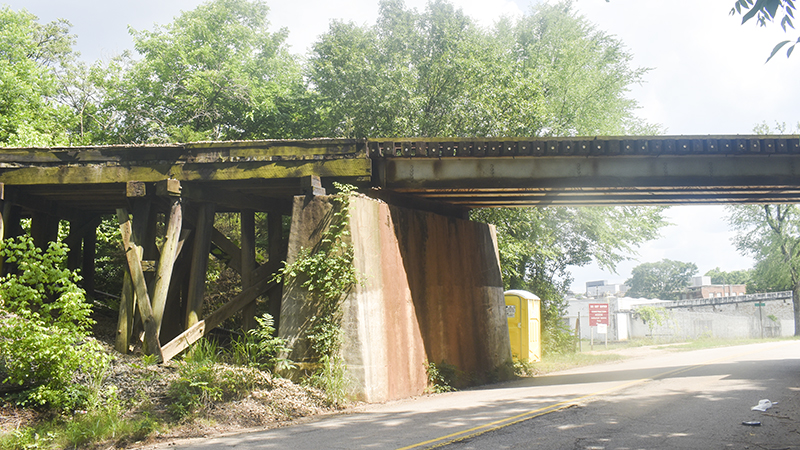 The LaGrange City Council last Tuesday spoke on the idea of closing the Leeman Street Bridge as part of a negotiation deal with CSX Transporation. This agreement will ultimately allow the Thread, an interconnection walking trail system in LaGrange, to continue around the Kex Mill area.

Since 2019, the city has been working with CSX Corporation to obtain a portion of their right-of-way, where the Callaway Clocktower is stationed, so that a planned section of the Thread can be extended through the area. In September 2021, the city entered into a preliminary engineering agreement to create a design for the Thread extension for CSX to approve. The plans for the design include expanding the Thread under the active bridge through was is currently a narrow opening.

“Typically, CSX does not allow a trail to go parallel with the railroad, for safety and other reasons,” Bullock said.

This area incorporates section 7 of the Thread, Assistant City Manager Bill Bullock said, which incorporates Southbend Park and Kex Mill. Currently, plans call for a spur to extend off the Thread to the Mullberry St. cemetery where the recently re-assembled Horace King Bridge is located, built by the son of acclaimed freed slave/architect Horace King, is located.

Section 7 of the Thread currently extends to Jackson Beverages on Douglas Street.

Part of the agreement with CSX and the city would be to fill in a pedestrian walking area with a culver under the Leeman St. bridge, essentially making the walkway a dead-end street.

Bullock said that surrounding business owners and homeowners have voiced favor to him of the bridge closure.

“There excited closing this because people just fall through there,” Bullock said.

With the Thread’s presence in the area, Bullock theorizes it could lead to redevelopment opportunities in the future.

“We met with several different developers who are interested in redeveloping the Kex Mill … and the Thread is a big component of that [when there is] the connectivity to downtown and Southbend Park. If we go a different route, that could seriously affect [that possibility,]” Bullock said.

At its work session on May 24, Bullock sought the LaGrange City Council’s input on the matter. Councilmembers were in general support of the idea of closing the Leeman St. bridge, though councilmember Nathan Gaskin noted there could be traffic issues following the closure.

“There’s going to be blowback,” Gaskin said. “As traffic is increasing in the city, we’re losing another cut through.”

In the past, the city and CSX worked in conjunction during the removal of the Juniper Street timber bridge last October. The bridge had been out of commission for vehicle use since approximately 2010, but was still used for pedestrian traffic up until its demolishment.