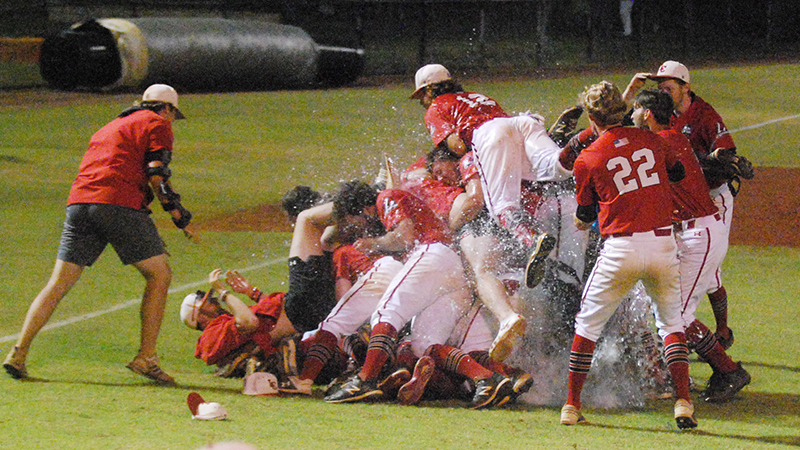 The LaGrange College baseball team punched its ticket to the D-III World Series for the first time with a hard fought 4-2 win over Chapman in the deciding Game three of its Super Regional on Saturday night at Cleaveland Field in Williamson Stadium.

“I’m feeling extreme joy for the guys, this program and the community,” head coach David Kelton said. “To be able to get to this point makes me very proud.”

Chapman forced the deciding game with a walk-off 9-8 win in Game 2 to start the day. The Panthers turned to sophomore Ethan Fry on the mound for Game 3 in what was just his fifth start on the season.

Fry responded with his longest outing of the season. He went 7-1/3 innings, allowing two runs on three hits, walked three, struck out six and improved his record to 2-1 on the season.

“Fry was unbelievable today,” Kelton said. “He set the tone for us.”

Fry and Chapman freshman Max Banks were hooked up in a pitcher’s duel through four scoreless innings. Banks did not allow the Panthers a hit in the first four innings.

With one out in the fifth, Rhett Hebert doubled to right center for LaGrange College’s first hit of the night. Gabriel Pallo laid down a perfect bunt to put runners at the corners. Pallo stole second and when the throw went into center field, took third as Hebert scored the game’s first run. Pallo came home on Rhett Mixon’s sacrifice fly to make it 2-0.

The Panthers came back with two more runs in the sixth. Joe Ruth walked to start the inning and took second on a wild pitch. Jack Layrisson tripled to left center to easily score Ruth with the first run of the inning. Layrisson trotted home when Cael Chatham flied out to deep center to up LC’s lead to 4-0.

Fry cruised into the eighth before running into trouble. He got the first out of the inning, but a hit batter and a walk ended his night as Tanner Chaffin came on in relief. Chafin got the second out of the inning on a strike out, but Davis Mieliwock’s two-run double cut the Panthers’ lead in half, 4-2.

In the ninth, Ki Osaka led off the inning with a double down the right field line. Chaffin got the first out of the inning, but Drake Mueller reached first after striking out on a pitch in the dirt put runners on the corners. Chaffin struck out Cole Minato for the second out and ended the game by getting Nick Kondo to line out to Pallo in right field. He picked up his first save of the season.

Hebert was the most efficient offensive player for LaGrange College in the game as he went 2-for-2 with a run scored and a walk. Ruth led the team with two RBIs despite not registering a hit in the game.

Dalton Brooks got the start on the mound with Chaffin, Chatham and Kramer all coming in from the bullpen during the game.

“We’re going to Iowa man,” Erves said. “I’ve been waiting for this moment since I first got here as a freshman.”

Ruth collected his 100th hit of the season in the fifth with an infield single. He added another hit in the ninth. Ruth is only the third NCAA Division III player ever to have 100 hits in a season. He needs three hits to break the Division III single season record.

LaGrange College goes to the Division III World Series as the no. 3 seed and will matchup with no. 6 seed Trinity (TX) on June 3 at 8:45 p.m. The Panthers will play either Eastern Connecticut State or Baldwin Wallace in the second round.