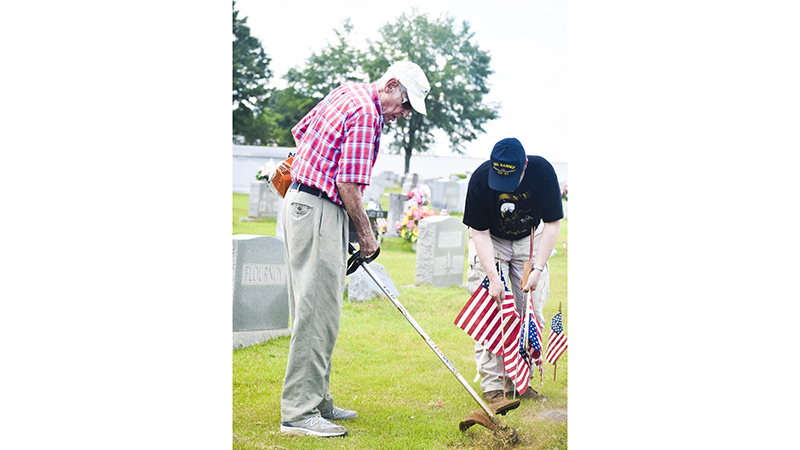 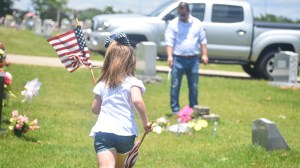 Both exclamations were shared amongst the over 30 volunteers who filtered in and out of Shadowlawn Cemetery Sunday afternoon to lay flags on the resting places of the expansive cemetery’s veterans. The flag-placing task is coordinated yearly by the members of the West Georgia Veterans Council, consisting of LaGrange’s American Legion Post 75, DAV Chapter 32 and the Marine Corps League Detachment 1040, who recruit volunteers each Memorial Day to place flags on Southview Cemetery, Meadoway Gardens Cemetery and Restlawn Cemetery. The annual tradition draws in everyone from area veterans to civilians and their children.

“It’s extremely important to us to teach them where they came from and not to take for granted the things they have that others down, and to teach this to them while they’re young,” said Candice Thompson who brought her two young daughters, Autumn, 8, and Elaina, 10. Both she and her husband have servicemen in their families and want their daughters to understand the role servicemen continue to have even in death.

“I feel bad for the men that died but I’m very thankful for what they did for us,” Autumn said when asked how the tradition made her feel.

Returning volunteers knew where to look, finding the common symbol of an encircled cross signifying a veteran’s grave with much ease. For many others, it was a sort of archeological excavation.

Steve Walczak, a member of the Marine Corps and a Desert Storm veteran, and Bobby Traylor, a retired member of the U.S. Coast Guard, teamed up to find and plant flags on the gravesites of a small cluster of graves in the center of Shadowlawn Cemetery. By the time they began the task in the late afternoon, flags had already been placed on the visible graves. But the duo was searching deeper than what was visible on the surface.

Walczak used the sharp end of a metal stake to prepare a hole for the flags. As he and Traylor came across a family plot where an evident marker should be, Walczak would lightly stab at the dry ground in search of a buried marker. When one was found, Traylor unburied it using his own weedeater.

Just like that, a serviceman from the Korean, Vietnam or one of the great world wars, was rediscovered, and they had a flag to show they were there.

It’s both a victory and a solemn occasion for the two servicemen.

“What’s sad is the reason [some of the graves] are like this is because their families are probably long-gone as well,” Traylor said. “Last year, I knew there were many [graves] that were looked over. I said I would bring my weedeater. We’re not going to look over anybody if we can help it.”

Traylor’s father, W.P. Traylor, served in WII and is also buried in Shadowlawn Cemetery, however, his grave marker does not bear the traditional acknowledgments of his service, and thus had the tendency to be looked over during the WGVC’s annual flag-placing.

Upon learning this, Walczak said that the misstep would be corrected before Memorial Day.

“Let’s make it so, Mr. Bobby,” he said, and he helped Traylor place the flag on his father’s grave.

Due to their military backgrounds and their families’ histories of service, the concept for remembering the fallen takes on a personal meaning.

Walczak attends Post 75’s flag-placing each year despite living in Fayetteville and has found a sort of solace amongst LaGrange’s veterans.

“When you’re military, it doesn’t matter what branch you were, they’re still your brothers and sister,” he said. “When I saw [the buried graves], I’m glad I’m here to do something about them. It’s our job to carry on.”