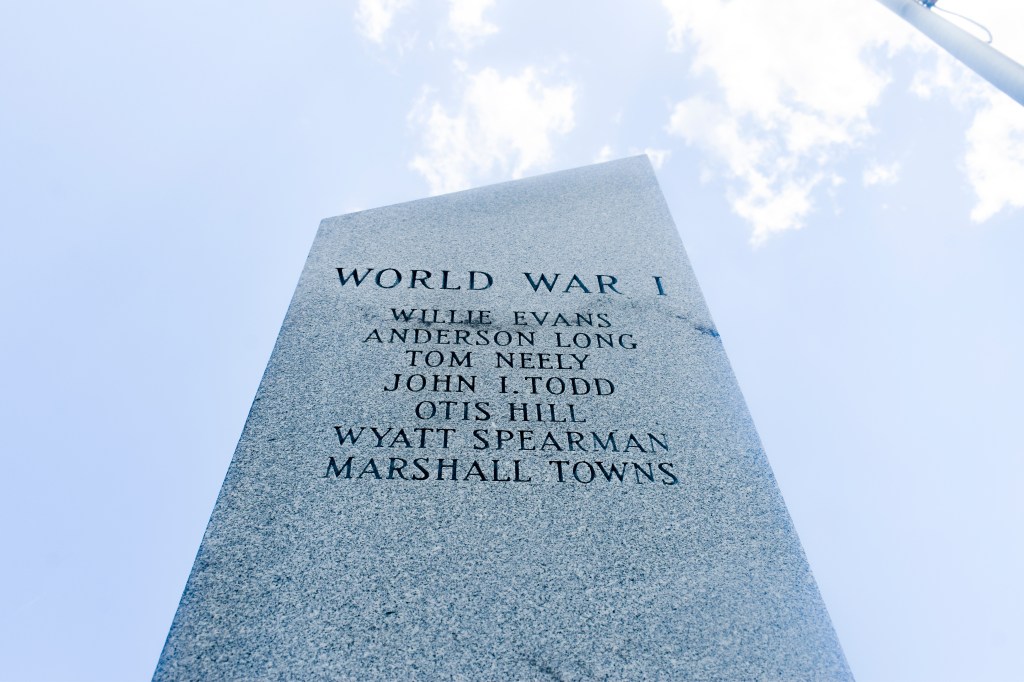 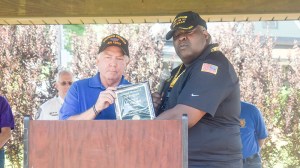 Post 152 commander Mark Shreve and member George Bailey hold up a plaque honoring Hogansville Black veteran Otis Hill. Due to a current lack of knowledge of Hill’s next of kin, the plaque will be on display at Post 152 until his descendants can be located.

HOGANSVILLE — What was a late night of research turned into a historic discovery for Blue Train Books co-owner Dan Read.

Last year, Read was conducting research using a historic database and typed in ‘Hogansville’ just to see what would come up. The results rendered the names of three Black veterans who were from the Hogansville area. But none of them were featured on the Calvin Hipp Park’s veterans’ monument which features the names of known area veterans who served in World War I, World War II, Vietnam and Korea.

“I typed Hogansville [into] the database, and there they were,” Read said.

Following the discovery, contacted Claude A. McKibben and Sons Funeral Home and former Hogansville Mayor Bill Stankiewicz who went through the steps to get their names added to the monument.

“They all took it very seriously,” Read noted.

During the Hogansville Post 152 annual Memorial Day celebration Monday, Post 152 Commander Mark Shreve accepted a plaque in commemoration of Hill. The plaque is on display at Post 152. Read received a plaque in honor of veteran John I. Todd, who Post 152 is named after.

According to information gathered from the Troup County Archives, the three are included in History of Troup County, written in 1933 by Clifford L. Smith. According to Smith, Spearman was white, though his military registration card states he was Black. Both Hill and Towns were Black and Hill was from Hogansville, while Towns was from LaGrange.
Spearman’s registration card says he was living in the community of Trimble, located near Hogansville. He was born in Grantville and at the time of enlistment, he was working as a farmer.
Towns’ registration card states that he was from LaGrange and was born Aug. 26, 1895, in the community of Louise, between Hogansville and LaGrange. At the time of enlistment, he was married with one child and working at the “Cotton Duck Mill.”
There was no further information available on Hill. George Bailey, the emcee of the Post 152 Memorial Day celebration, said there was a Hill family in Hogansville, but it was a different branch than Otis Hill. 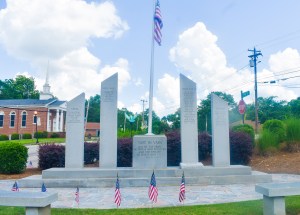 The Calvin Hipp Park veterans monument in Hogansville, which reads, “Not in Vain. May be the pride of those who survived and the epitaph of those who fell.” The monument contains names from Hogansville veterans who served in both world wars, Vietnam and the Korean wars.

Lewis Powell, an archivist with the Troup County Archives, noted neither of the three appeared in any local newspapers and do not appear to have been buried in Troup County.

The ceremony additionally featured the Rev. George Collins, the division 9 coastal region commissioner, as the ceremony’s guest speaker. Collins spent over 30 years serving in the U.S. Coast Guard and currently serves in the Coast Guard auxiliary. Collins gave a history and description of the Coast Guard’s work in the military. The ceremony additionally featured patriotic music from Atlanta saxophonist Christopher King.
Read is still researching to find any living family members of the three recently-honored veterans. Anyone who may be a relative or knows of possible relatives may contact Post 152 at (706) 637-5742 or email the LaGrange Daily News at news@lagrangenews.com.