LaGrange College baseball team gets a sendoff to the World Series 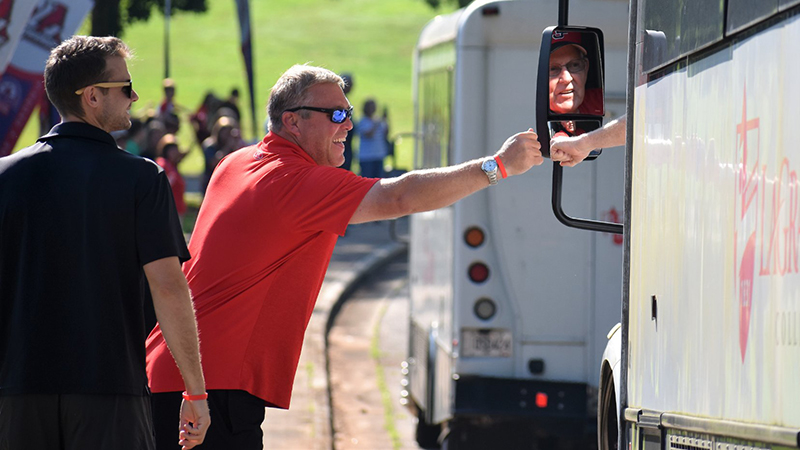 The LaGrange College baseball team departed the campus on Wednesday morning to head to Cedar Rapids, Iowa to take part in its first ever trip to the NCAA Division III World Series.

The Panthers were given a sendoff by the college and the community at large as both LaGrange College President Susanna Baxter and LaGrange mayor Jim Thornton, a graduate of LaGrange College in 1994, were both on hand to shepherd the team off.

“This is not the party we want,” Baxter said. “We want the World Series party.”

The players carried a picture of their dearly departed teammates Jacob Brown and Stephen Bartolotta who passed away in a tragic car accident on May 14.

“In a season full of tragedy, the entire city of LaGrange has been thinking of you, praying for you, and standing with you,” Thornton said. “We’re so excited for you as you venture off to Cedar Rapids for the World Series.”

The two team buses were given an escort by the LaGrange Police Department.

The Panthers will be playing in their first ever DIII World Series as the team won a best-of-three series over Chapman in the teams first ever appearance in the Super Regional. The team will be making a trek of over 900 miles to see what destiny awaits in their journey to Cedar Rapids.

The Panthers have accumulated a record of 42-7 as they head into the final stretch of their season. The team will play Trinity (Tx.) in the first round of the World Series on June 3 at 8;45 p.m. The Division III World Series is set up as a double elimination with the losing teams in the first round offered a path to redemption. LaGrange College will play either Eastern Connecticut State or Baldwin Wallace in the second round.