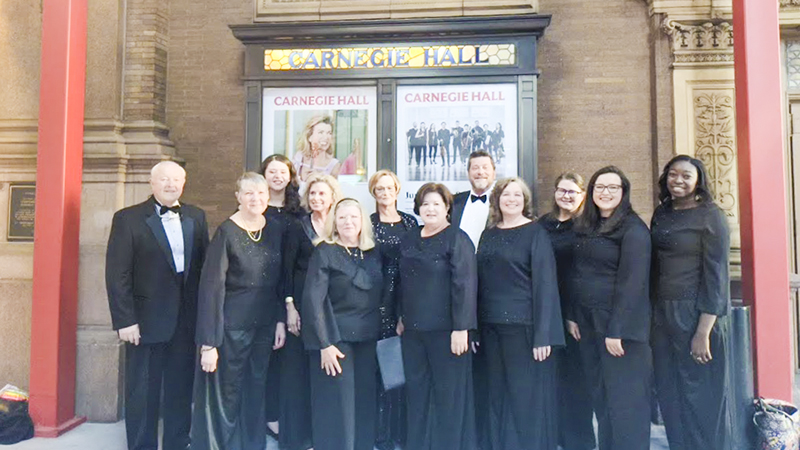 Members of the Choral Society of West Georgia had long anticipated they would one day return to the prestigious Carnegie concert hall in New York. When the pandemic hit, this near-annual trip for the society became more of a distant hope, but circumstances calmed and the group was ready to purchase plane tickets and once again perform in the footprints of the hundreds of performers before them.

This trip was a bit different than what the Choral Society experienced pre-pandemic. Due to the current war ongoing in Ukraine, the performance doubled as a requiem for the casualties of the war. 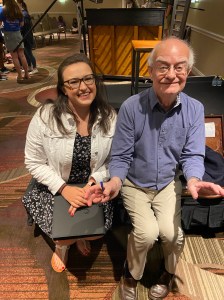 Under the direction of renowned English composer and conductor John Rutter, the Choral Society performed Rutter’s original piece, “A Ukrainian Prayer.” The Choral Society was among nearly 200 other singers from throughout the country who participated in the performance, said Bettie Biggs, artistic director of the Choral Society of West Georgia. The performance was part of the New England Symphonic Ensemble and was the 664th performance conducted at Carnegie Hall. It was one of the first live performances the concert venue has performed since the initial pandemic.

“These were choirs that signed on to do this project two years ago in 2019,” said Biggs, who returned to Carnegie Hall for the second time. “After three years of waiting and not knowing, it finally took place this weekend.”

Rutter wrote “A Ukrainian Prayer” in one night. He published a piece of the composition on his official Youtube Page as well as an explanation of how the piece came to exist.

“How does a composer respond to a global tragedy,” he inquires in the five-and-a-half-minute long video published in March. “I suppose by writing music. The first thing I wanted to do was write some music that would respond in my own way. I hope the meaning of the text will resonate in people’s hearts and reach out to the people of Ukraine in their hour of need.”

The performance was Biggs’ first time meeting Rutter, whom she described as humble and passionate. Rutter told her he wrote the piece in one night and instantly sought volunteer singers to perform it.

The lyrics to “A Ukrainian Prayer,” were, of course, in Ukraine, a challenge many of the Choral Society’s singers overcame through several practices. At one point, the group received assistance from world-renowned opera singer Michael Hendrick who assisted them with the phonics of the language.

By the performance’s opening night on May 30, the group was ready.

“The acoustics are so perfect. It’s so awe-inspiring,” Biggs said. “The last two movements [of the composition] are so gorgeous and so serene. I thought, ‘This must be what Heaven sounds like.’ It was almost an out-of-body experience. I got out there, and I thought, ‘Oh my God, my legs are shaking.’ It’s so overwhelming that you’re on this stage where some of the greatest names in music history have performed for over a hundred years. It literally takes the breath out of you, which for a singer is not good.”

For several of the 12 singers who went on the trip — a third time for the Choral Society overall — it was both a culture shock and a sort of homecoming.

“I felt at home with all the singers,” said Paula Sharp, a long-time member of the Choral Society of West Georgia. “The prayer was unbelievably beautiful. Just being in a group that big was amazing. We all had tissue in our pockets just in case we started crying, but they were happy tears.”

Samantha Cotton, the chorus teacher at Callaway High School, ultimately enjoyed her first trip to New York and even made it back to LaGrange in time to see some of her students graduate. Cotton was originally nervous when she read the sheet music to Rutter’s “A Ukrainian Prayer.” But soon she adjusted to the language and confidently sang with her group.

“It was surreal,” Cotton said. “Here we are working with a composer who created music I’ve sang at school and my students have done as well. It was phenomenal … and Carnegie Hall is the coolest-sounding place I’ve ever been in.”

The Choral Society of West Georgia will perform “A Ukrainian Prayer” at St. Mark’s Episcopal Church this Sunday at 10:30 a.m.