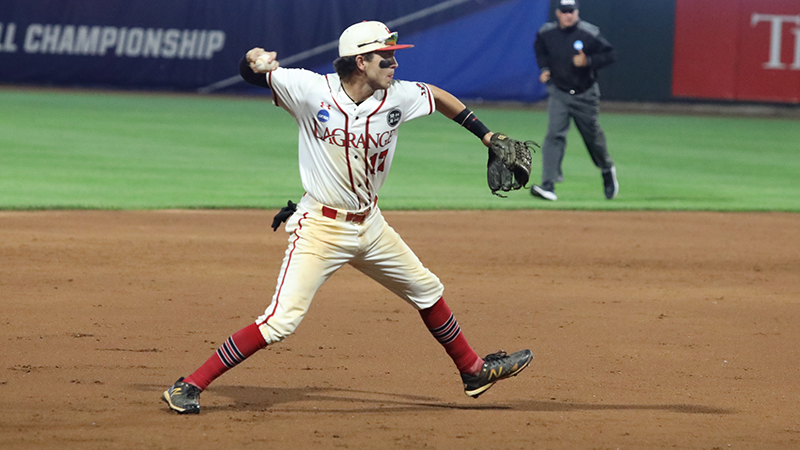 The LaGrange College baseball team is gearing up for its second World Series game. The no. 4 ranked Panthers will take on the no. 1 ranked Eastern Connecticut State Warriors with the winner advancing to the semifinals and the loser having to play the winner of Baldwin Wallace and Trinity (Tx.).

LaGrange College is led by its formidable offense that has combined to hit .346 with a .444 on base percentage over the season coming into the World Series. Joe Ruth, a junior, leads the team with 101 hits and is only the third player in the history of DIII baseball to eclipse 100 hits on the season. Ruth also led the team in stolen bases with nine and provided a quality defensive glove at third base. The USA South Conference player of the year leads the team with a .443 batting average, 10 home runs and 82 RBIs this year.

Cael Chatham is another weapon for the Panthers as he has hit .381 with five home runs and 56 RBIs. The junior infielder has been reliable defensively and on the mound, as well as he has come in for relief in four of the Panthers past seven games and only allowed one earned run on three hits over that span.

Jack Layrisson, a senior, has been another key piece for the Panthers at the plate. Layrisson is riding a five-game hitting streak in the most challenging part of the season and has hit .368 with five home runs and 64 RBI overall on the year. His leadership and experience in the heart of the lineup will be pivotal for the Panthers in their quest to capture the program’s first national title.

Baley Coleman led the pitching staff, who has pitched the most innings (88) for the Panthers on the season. He leads the team with 10 wins and his ERA of 3.68 is the lowest on the team among any pitcher who has started a game this season. The junior is the leader on the pitching staff and despite not having his best stuff in a game one win over Chapman in the Super Regionals, he will likely get called on to start in game one of the World Series.

The team’s no. 2 starter is Dalton Brooks, a sophomore from right up the road in Newnan. Brooks is 6-1 with a 4.55 on the season and is the only Panther to throw a complete game this season. Brooks and Coleman are the only two active LaGrange College pitchers that have started more than five games this season.

Ethan Fry will likely be the team’s number three starter despite only having five starts on the year. Despite not starting a game since March 6, Fry pitched the two straight game three close out wins in the Regional and Super Regional round of the playoffs. Still just a sophomore, Fry has been erratic across his appearances this season, but was absolutely stellar in his seven and 1/3rd innings pitched in the winner take all game three of the Super Regionals against Chapman. Fry only allowed two runs on three hits with six strikeouts as he controlled the no. 17 ranked team in the country.

Tanner Chafin, a senior, is the team’s most essential reliever. He has pitched in all the Regional games and two of the three Super Regional games.The submarine arm righty will likely be the first named called upon to enter the game out of the bullpen.

Eastern Connecticut State comes into this game having beat Baldwin Wallace 10-3 in the first round of the NCAA Division III World Series.

The Warriors have plenty of offense, but pride themselves on their formidable pitching staff led by no. 1 starter Billy Odlham who leads the team in starts (13) and innings pitched (83.1). Oldham, a junior, is one of the best starters in the country and has an ERA of just 2.48. Oldman got the start in the first game of the tournament for the Warriors and was outstanding in his 6 and 1/3rd innings of work. He only allowed two earned runs on eight hits and 10 strikeouts.

The entire Warrior staff is dominant as the team has the lowest ERA in Division III baseball with a 2.90. All seven Warrior pitchers that have pitched at least 20 innings this season have an ERA of under 2.80. Perhaps none are as important as Bryan Albee who leads the team with a 1.53 ERA and can start or come out of the bullpen. With Oldman getting the start in the first game of the World Series versus Baldwin Wallace, it could be Aldee who gets the start versus the Panthers. He also leads the team with four saves to show off his versatility. Albee has eight starts in 23 appearances this season. His batting average against is a paltry .181. The Panthers could also see Tommy Benincaso or Aidan Dunn, who have at least eight starts on the season and each has an ERA under 2.50. With such an assortment of different arms to choose from, it remains unclear who will get the start on the mound versus the Panthers.

Offensively, the Warriors are led by Luke Broadhurst in batting average (.425), on base percentage (.543), home runs (13) and is second on the team in hits (62) and RBIs (49) despite having missed a handful of games this season. Matt Malcom, a senior, is another one of the Warrior’s most dangerous players from the plate. Malcom has hit .365 with 10 home runs and 57 RBIs heading into the World Series. John Mesagno forms the trio of formidable offensive weapons with those two players for the Warriors.  He hit .345 with 11 home runs and 47 RBIs before playing in the World Series.

It was Jason Claiborn who stole the show in their opening game against Baldwin Wallace as he went 2-for-5 with four RBIs to lead the Warriors offensively from the ninth spot in the order. Claibron killed the game off with a bases clearing triple– his first of the season– in the bottom of the eighth in that opening game. Josh Tower also had a good day offensively as it was not the usual suspects doing damage from the plate. Tower went 2-for-3 with two RBIs, a run scored and a walk.

The Warriors have won the National Championship four times with the most recent occasion being in 2002.

The Panthers will play Eastern Connecticut St. on Saturday at 8:45.