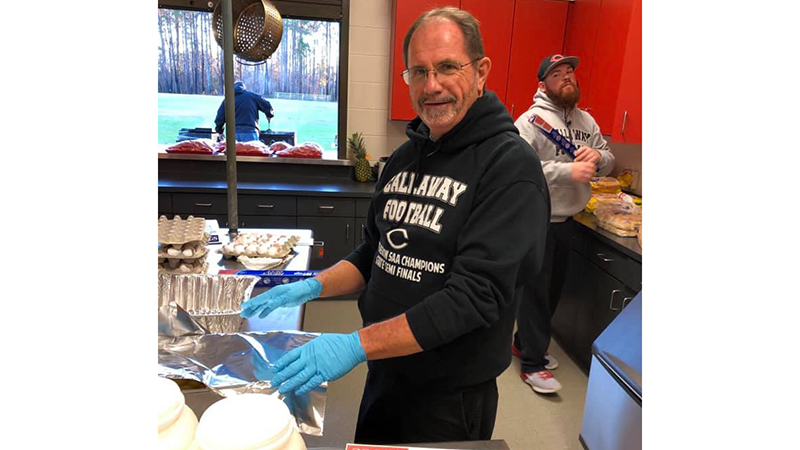 The Callaway High School family and the Troup County area at large is mourning the loss of dearly beloved Cavalier coach Tray Tucker, who passed away earlier this week. Tucker was a pillar for the athletic program, but his loss resonates much further and wider than just Callaway athletics.

Tucker was a compassionate and selfless individual who always put others — especially the Callaway students — above himself.

Wiggins worked alongside Tucker for 20 years as they helped build the Cavaliers football program into a powerhouse. Last season was the first time Wiggins took the field at Callaway without Tucker, as his good friend fought an illness.

“There was never a job too big or too small for him,” Wiggins said. “He’s been a foundation for Callaway and Hogansville for so long, and he was such a selfless man. He can’t be replaced.”

Tucker brought this sense of purpose to the Troup County School System for over 35 years. A graduate of Hogansville High School in 1983, Tucker stayed close to home and helped mentor a plethora of young people coming through the school system in what would likely number in the thousands now.

Tucker wore many hats during his time at Callaway – he was an assistant coach for football, basketball and track along with being the bus driver to most of the away games the various teams embarked on. To borrow a sports cliche, Tucker was always willing to do the dirty work for the athletics program at Callaway. Whether it was taking home laundry from the locker room or buying lunch for a student or driving the various teams halfway across the state regardless of what night of the week it was, Tucker was willing to do whatever was necessary to help Callaway be great.

“Stuff that nobody else wanted to do, he always would do it,” said Callaway basketball coach and assistant football coach Deyano Martin.

“He loved the kids,” said Kareem Douhne, who coached alongside Tucker at Callaway from 2004-19. “He would bring them treats, gatorade, whatever. He sacrificed so much for others.”

Tucker was always quick to sacrifice his time and money to help people out, but he was more than that to the coaches at Callaway. He was a father figure, a mentor, and a friend as well.

“I could call coach Tucker any time, and he would always pick up the phone,” Martin said. “He was a mentor to me when I first got to Callaway (in 2011).”

Martin and Tucker shared a special bond. The two became so much tighter than just co-workers. Tucker took coaches like Martin and Douhne under his wing when they first arrived as fresh faced young coaches and helped form them into leaders of young men..

“He was a special man,” Douhne said. “He was like a father figure to me.”

Tucker and Douhne used to plan out trips every fall to go to sporting events involving their former student-athletes at Callaway. They traveled to Ole Miss, the University of Georgia, and Kennesaw State together to see their former players participate in collegiate sports.

It was hard for Douhne to leave Callaway back in 2019 and leaving his buddy Tucker was one of the most difficult parts. However, the two friends would keep in contact and talked nearly every day despite not working at the same location anymore.

Tucker handled so much of the logistics for the girls basketball team that he felt like an assistant coach to Martin. Tucker was happy to do it as he bled the red and black of Callaway. He wore the Callaway crest as a badge of honor and a source of pride that he took with him until the end.

“He was all Callaway,” Martin said. “No other school meant anything to him but Callaway. If anybody was walking around talking down to Callaway, he didn’t want to hear that.”

“There’s always going to be a void there,” Martin said. “We probably never fill that empty feeling.”

A memorial service will be conducted at noon on Saturday at the graveside in Myrtle Hill Cemetery in Hogansville, with Pastor Brenda Rhodes officiating. In lieu of flowers, the family suggests that memorial contributions be made to Callaway High School Athletics, 221 Whitfield Rd., Hogansville, GA 30230.