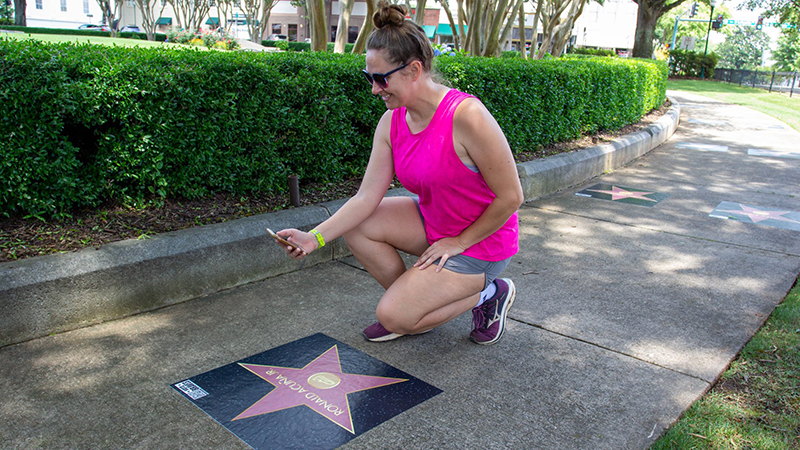 The Atlanta Braves have brought some Hollywood flavor to LaGrange as the city has been selected as one of the All-Star voting Walk of Fame cities. The Braves are creating temporary Walk of Fames across certain cities in Georgia including right here in downtown LaGrange. The stars were put in place on Thursday on the east side of Lafayette Square.

The Atlanta Braves contacted the city of LaGrange last week to see if the city would be interested in putting the stars in the city. It was a quick yes from the city.

It also helped that LaGrange had established a strong relationship with the Braves when it made a bid for the World Series trophy to be shown at Sweetland Amphitheatre in August.

“We love working with them,” said city of LaGrange marketing/communications manager Katie Van Schoor said. “We’re so excited to work with them.”

“When you think about Los Angeles, you think about the movie industry,” Adam Zimmerman, the Braves’ senior vice president of marketing and content, told the Atlanta Journal-Constitution. “That was the core creative idea (behind the campaign).”

The city of LaGrange will also be putting these movie posters around town.

“The posters will be based on the player’s lives like ‘Coming Back Home’ is the one for Matt Olson that just came to the Braves and is originally from Atlanta,” Van Schoor said.

These posters have not been printed out yet, but the city plans to have them printed and put up around town long before the first round of voting ends.

You can also go to Braves.com/vote to help out the team. You can vote up to five times in any 24-hour period on MLB.com. The first phase ends on Thursday, June 30. The final phase of voting begins on Tuesday, July 5.