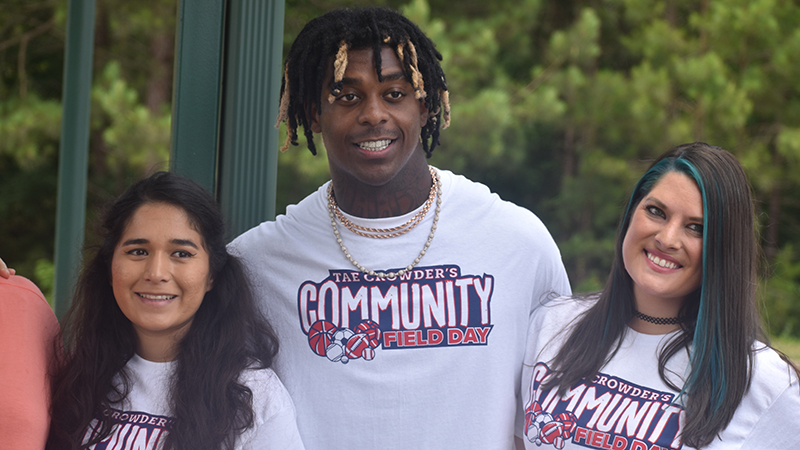 Tae Crowder returned to his high school alma mater in Harris County this past weekend to host a community event to give back to the area that helped raise and mold him into the person he would become.

Crowder, a native of Pine Mountain, is a class of 2017 graduate of Harris County High School and a former University of Georgia football player. The former Tiger and Bulldog now suits up for the blue and white of the New York Giants. As the last pick in the 2020 NFL draft, Crowder was given the title of “Mr. Irrelevant” but he has been anything but irrelevant in the NFL as he started all 17 games for the Giants last season and seven games during his rookie season.

With so much on field and off field success, this event gave Crowder an opportunity to show his appreciation for his hometown.

Kids from the community got treated to a field day on the very same football field Crowder used to dominate on not so long ago. The field day consisted of 100 participants, and there were 15 stations set up on the field: 10 games, three rest stops, a face-painting stand and a New York Giants-themed photo booth. There were 20 teams participating in fun and competitive games with each team including five members of different ages. Crowder gave the winning teams some memorabilia.

The community event was not just a field day for kids, as Crowder also set up a drive-thru for essentials to hand out. Dozens of cars lined up to receive necessities as cleaning supplies, paper towels, diapers, etc.

The event would not have been possible without the plethora of volunteers from the community that came out to help proceedings. Some of the volunteers helped manage the kids’ field day while others graciously handed out items in the drive-thru line.

This is not the only community event that Crowder is a part of. Crowder regularly gives back to those in need in the Pine Mountain, Atlanta, and Columbus areas as a part of the Make A Change movement in local communities.