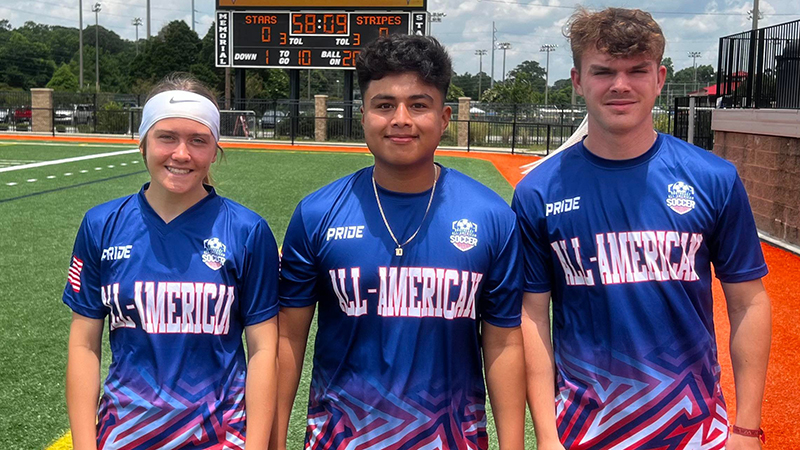 The Callaway soccer teams were well represented in the Southeast All-American game this past weekend as three former Cavaliers took part. Keeley McGuffin represented Callaway in the girls game with Blake Eubanks and Jostin Raymundo participating in the boys games. All three players are recent college graduates.

The games showcased some of the highest quality soccer players in the United States from the class of 2022-24. The games featured 72 players (36 boys and 36 girls) divided into teams: Team Stars and Team Stripes. The three Cavaliers will all represent Team Stars. The event is one of the premier high school soccer recruiting events in the country.

The games took place in Jennifer Ross Soccer Complex and Memorial Stadium in Savannah on Saturday. The players trained Thursday and Friday in which they were able to show their talents to college coaches, scouts and professional team organizations of all divisions. Over 150 college programs were represented from across the country, ranging from NCAA DI, NCAA DII, NCAA DIII, to NAIA among a plethora of others.

Pineda is the current head girls soccer coach at Chestatee High School and founded the Southeast All-American soccer game back in 2020.

Eubanks looked to impress in an attacking role for the boys team. He was a key figure for the Cavaliers last season and was looking to get some eyes on him from the next level this weekend. Raymundo was a star for the Cavaliers boys program this past season as he was named the Region 5-AA player of the year for 2022. While he has not drawn the kind of attention from the next level that his talents warrant, this was a stage for him to show what he is made of. McGuffin is already signed to play with Point University starting in the fall but relished an opportunity to show her skills alongside other talented individuals.

After a 4-4 score at the end of regulation, the boys Team Stars earned a penalty kick shootout victory over Team Stripes. Despite not grabbing a goal, Eubanks and Raymundo were instrumental in powering Team Stripes to a victory.

The girls Team Stripes also earned a win over Team Stars although it was a more emphatic 2-0 win.

The players got to keep their jerseys along with receiving a practice penny, a new ball and a bag.

The 2023 Southeast All-American games will take place in Tennessee and will feature the same format.

“This event was one for the books as we were able to be around quality talent, experienced coaches from across the country, and even having the first ever Penalty Shootout in Southeast All-American Sports history,” Pineda wrote.