500 miles and a dream: Cycling coach and LaGrange teen traveled from Columbus to Brunswick on bikes 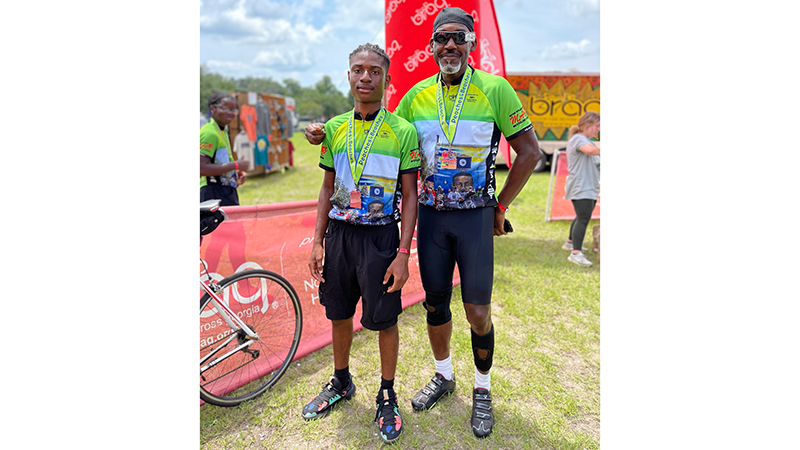 Five hundred miles and a dream. That is what stood in front of the 17-year-old Tre Franklin. A week later, 500 miles lay behind him and dreams transformed to reality. Tre completed an arduous cycling journey from Columbus to Brunswick from June 4 to June 11 through an event called Bicycle Ride Across Georgia (BRAG).

It seemed like an unachievable goal for Tre, but this last year of cycling has altered his perspective on what he thought was possible. Tre, a homeschool student, was looking for another activity to get into last summer when his mom suggested cycling. He was apprehensive at first because it was a far cry from his favorite sport, basketball.

“At first, I didn’t really want to do cycling, I thought it was lame,” Tre said. “I tried it out for a week or so, and I really got into it.”

One of the main reasons he got so involved was the mentorship of Eddie Rhodes, who has coached him since he got into cycling last year and accompanied him on this trek across the state.

“He’s been more than just a coach,” Tre said. “He’s been teaching me life lessons and things about the bike. If it wasn’t for him, I wouldn’t be doing this at all.”

Rhodes, a retired college educator, is the volunteer coach and coordinator for the LaGrange BRAG Dream Team Cycling program. The Dream Team Cycling program started in Atlanta in 1994 and has expanded across the state since its inception. The program works with the youth aged from 11-17, so they can learn about the discipline involved with cycling.

Rhodes and Tre have been working together for about a year now and their relationship has really blossomed.

“She brought him by last August and, of course, he was not happy at first,” Rhodes said. “He didn’t want to get into cycling, but the first day he kind of took a liking to it.”

Like became love and now Tre is the premier biker in the family. His mom was the one who introduced him to it, but he has now surpassed her abilities on a bike.

“She only does like 10 miles, a little light work,” Tre said with a laugh. “I do a little bit more than that.”

Going into this trek across Georgia, Tre was nervous about how it would play out. The furthest cycling journey he went on before this was under 100 miles. This was quite the leap of faith for the young cyclist, but it was a leap worth taking. There were times along the way that had him questioning if he could power through and complete the journey. Rhodes being there for every mile of the journey helped Tre power through the doubts. The ride saw the duo stop and camp on farms every night, which was also a new experience for Tre. Luckily, this was not Rhodes first experience in this department and having him along to guide Tre was a key factor in the young man being able to complete the journey.

Tre was not the only one who had some nerves going into this, so did his mother, Nikki Franklin. She was in a constant state of worry for her son and took a few days off to go to the beach to relax and take her mind off the potential dangers he could encounter on his journey.

Tre was the only Dream Team member from LaGrange to complete the whole journey. His reward? A trek road bike which every member of the dream team receives if they complete the BRAG.

Tre has not had the chance to spin the wheels on his new bike as he is still in rest and recuperation mode.

Tre is unsure if his schedule will allow him to join in on the BRAG race again next year, but this is certainly something he plans to do again. If not in 2023, Tre plans to back out there in 2024 at the latest.

“I told coach Rhodes I don’t know about next year, but I will be doing BRAG again,” Tre said.